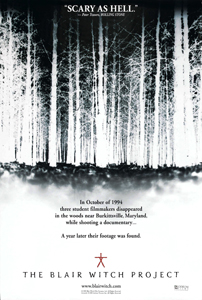 The youth of today can very easily dismiss and forget how influential this film really was.

Three friends go into haunted woods to create a documentary about the old tale of The Blair Witch, but when they never returned only the footage remains of their last moments. This is that footage.

Or so the film likes to be believed.
Similar to imaging the time before Star Wars, when films had no merchandise, it is hard to imagine the horror genre without handheld or “found footage” ideologies. In 1999 The Blair Witch Project rocked the genre with a stylistic take on horror never seen before. With a tiny budget of around $60,000 it walked away with over a million dollars in its opening weekend and a whopping $140,000,000 total gross box office. An absolutely incredible feat and featured in the Guiness World Records.
Some fans of the film actually believed the events were real; that the film was “found footage”, going so far as to send sympathy cards to the lead actress’s mother.

Much of the film today can be considered ‘generic’ and ‘boring’ but I still feel some dread from watching this, especially within the last twenty minutes of this eighty minute experience. You have to understand that nothing like this had existed before. Paranormal Activity, REC, even Cloverfield, and the myriad of others we see now, all have this film to thank; without it they would not have existed.
Much of the film’s drama stems from improvisation, and a merciless streak from directors Daniel Myrick and Eduardo Sanchez. The creators had informed their actors that the legend was real before shooting, planted locals to be interviewed in the film who told stories of it, and even messed with the stars, unscripted, while they were in the woods. This included shaking their tent in the middle of the night, even giving the actor’s less and less food throughout the eight days filming to cause frustration and mounting tension.
Luckily, the three actors themselves had agreed amongst themselves to not break character during the shooting, using the safety word “taco” if they really had to.

Certainly, while some elements appear dated and limited, there is a real sense of anger, frustration and growing hopelessness throughout the film.

The Blair Witch Project is not without faults, but they are remarkably small and simply due to its small budget and its overall intent. It is shot dizzyingly in handheld throughout, mostly in black and white with only some colour (shot with two different cameras) and the footage is often dark, blurry or even pitch black. Many audiences suffered motion sickness. Today it is very grainy, deliberately so, and so opaque in its mystery, subtly and improvised script that desensitised audiences today will find it tedious at times.

It does what horror does best nowadays, using audio engineering to its best potential. It often isn’t anything you see that frightens you, out in the woods alone it becomes the sounds you hear that scare you. Those moments of utter blackness and half-images towards the end leave you anxiously listening to any sound.

It truly deserves to be remembered as the one that started it all, and if you let it in; sit down in the dark and just watch it without distractions, you’ll find yourself, seventeen years on, still a little freaked out by it.