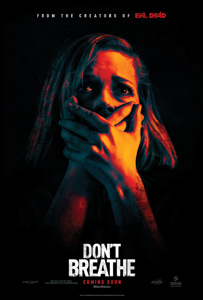 A tense, well executed horror/thriller that demands your attention.

Three thieves are informed that over $300,000 cash resides in the home of a blind war veteran living in an abandoned neighbourhood. But in deciding to rob him quickly goes sideways upon entering the house, and they find themselves hunted.

Don’t Breathe is an excellent little horror movie. Mostly because it bucks the trend of most modern horrors by using very little to tell a great deal. The main premise is our protagonists being hunted down in a house that is alien to them by a blind man determined to kill them.
It is deliciously tense.

The film opens with establishing our protagonists as not inherently bad. Rocky, a single mother living in Detroit, is robbing houses to pay for her daughter’s well being while her own mother abuses and leeches off her. Rocky’s boyfriend wants them all to get out of Detroit for good, while Alex harbours feelings for Rocky and with his father’s work in homeland security, enables the three of them to break into houses undetected.
Already, we have well rounded and sympathetic characters who have their backs against the wall. Which inspires confidence in the rest of the movie, where we see these characters in incredibly tense moments, pinning themselves against walls or hiding in cramped spaces to avoid Stephen Lang’s ‘Blind Man’, who we clearly see can handle himself in a fight.

The film takes some really dark turns too, which I won’t spoil here because I never saw them coming. We are with our protagonists all the way; the score and the use of total silence brings out all the tiniest of sounds our characters accidentally make, and the film-making is so cleverly woven together that you can fill in what you can’t see – literally, sometimes.
The subtly and intelligent filming here shouldn’t be understated, an early swooping camera move throughout the house establishes certain elements important later, or simply gives the audience the lay of the house. This makes even the most traumatic and heart-racing moments clear; we know where people are going, and we are shocked when a jump scare catches us off guard.
Naturally, the script is quite minimal; our characters need to stay quiet! So this subtle camera work and thought-out set design is very well done to tell us what might happen next.

There are only very minor issues I have with it. Like with one scene ends with a character breaking through a window, despite seconds earlier it was established they couldn’t get through the windows? I may have missed something, but it certainly seemed that way, and for a film so dedicated in letting you know what is happening with subtly in the cinematography, it stood out.

It is a great, engaging little thriller with horror aspects. Definitely recommended, just don’t try eating popcorn while watching it!