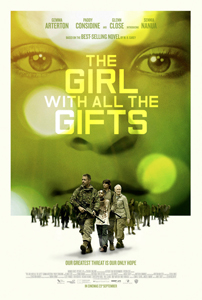 A grim, post-apocalyptic take on the zombie movie, and a very solid entry in the genre!

The world is ending. Tiny pockets of civilization battle for survival against hordes of rabid humans driven mad by a fungal pathogen, and yet one facility believes it has a cure to the outbreak. Melanie is one of several children who exhibit traits of resisting the virus…

Based off the book of the same name by M.R. Carey, The Girl with All the Gifts is a low-budget British thriller set in post-apocalyptic England, bringing about happy memories of Danny Boyle’s powerhouse 2002 zombie flick 28 Days Later.
As is usual with modern zombie movies, these aren’t traditional zombies. You have probably heard of Cordyceps; a fungal virus that preys on ants (mostly) by hi-jacking the insect’s brain functions, climbing to a high point before using the creature’s body to produce huge fungal masses from its brain that then spreads spores.

Well, this is that virus only mutated to attack humans.
From a critical standpoint, the film doesn’t do a whole lot different with the genre. We have zombie infested cityscapes, we have zombie hordes rushing in huge numbers, hopes of a cure, limited supplies for our survivors. Fairly by the numbers. The film’s second act is a little hopeless too; we know very little about the outside world and how trained these survivors are… But when your commanding officer demands “suppressors only” on rifles, and you promptly fire one without a suppressor within two minutes of him ordering you not to… Yeah, your an idiot.
There’s a dizzying sense of bewilderment as our characters blindly head into densely zombified cities… because that’s a good idea.

However. This film has Glenn Close in it! It also has some really good performances across the board, especially from its female characters. Gemma Arterton as a woman trying to teach these children from the confines of an underground bunker where the film begins, and especially Sennia Nanua as Melanie! This girl is going places.
The film has a great juxtaposition of human weakness and childish enthusiasm. Melanie has been brought up well, but within the confines of a bunker. That, and she’s got a craving for flesh. She’s both the most level-headed, but also the most dangerous. It is a great push-and-pull dynamic that constantly weighs on our characters’ shoulders, and Nanua nails it.
The film has a wonderfully tragic vibe. The build up is fantastic during the first act, being set completely underground, we learn what is happening from Melanie’s perspective. While zombie-fungus people are present, the film is ultimately a morose and slow affair. The soundtrack is warbling and distorted, mashing with the overgrown and dilapidated buildings surrounding us. None of the characters are especially likable; they’ve all had trauma and heartbreak and agendas… this film isn’t going to make you feel especially good.
But it is the zombie apocalypse. What do you expect?

There’s plenty of gore and zombie tropes for horror fans, but its the performances that TV-turn-movie debut director Colm McCarthy gets from his actors that delivers. While there are a few trope-y missteps and a vague middle section, this deserves a lot of recognition.