We got ourselves a little Mexican Standoff!

This is a Remake Rumble Review with a difference.
While some are quick off the mark to argue the 2016’s Magnificent Seven as a worthy remake, touting their knowledge that the original was a remake too (le gasp!) I am happy to say that I had seen both long before this year’s blockbuster.

It is true, not many people know that Magnificent Seven, even in its 1960s form, was a remake of a Japanese film called Seven Samurai, possibly due to the two film’s radically different styles and interpretations. This year’s film though… looks a little more like the “remakes” we have come to expect in the last five or ten years.

Still, let’s have at it, with rifle, revolver, sword or even gatling gun! 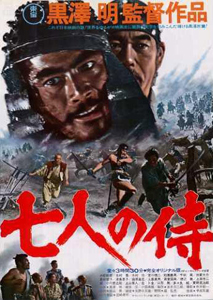 Akira Kurosawa’s epic masterpiece, inspiration for such western movies as Star Wars, is still a class above the rest today.

A small farming village is prey to a horde of bandits who arrive every year for the harvest and take everything for themselves. Some of the hapless farmers seek help from travelling samurai, but does the honorable and often flippant samurai care to risk their lives for some poor famers?

Seven Samurai is an investment of your time, lets say that. Maybe not on level with Gone with the Wind or the Lord of the Rings films (which you need to revolve your whole day around) but over three hours and thirty minutes is quite a task. Especially given most people these days cannot tolerate subtitles for thirty seconds.
But like a lot of epics in the fifties, sixties and seventies, Seven Samurai is an awesome example of how to pace a movie of this size and scope, with a very clearly defined three act structure.
First off, we are shown our villains. Mounted on horseback and armed to the teeth, looking down on a lush valley and the farm village hidden inside it. Even in black and white there is a great richness and texture to everything. We don’t see our antagonists again until the final act; they don’t even have names!
The farmers, desperate and scared, know that the bandits would return. Fortune favours them when a ronin (a master-less samurai) Kambei Shimada who saves a child held hostage. Kambei is an incredible character, played by Takashi Shimura. When I watched this when I was younger I didn’t appreciate him, but now, he brings a real presence as the leader of the future group.
Most of the samurai are collected together when Kambei and the farmers travel to a local town and tentatively watch the passing, posturing samurai. This is probably my favourite scene. Kurosawa puts us in a fixed camera frequently, mirroring the farmers’ own eyes watching the oblivious samurai walking by. The music too in this scene is great, great comedic atmosphere as well as mounting anxiety.

Two characters always stood out for me though. Kikuchiyo played by Toshiro Mifune, and Kyuzo played by Seiji Miyaguchi. Both men play the opposite ends of the spectrum and could be considered by today’s standards as archetypes. Kyuzo is a silent but deadly samurai, the one you know cannot fail at a task involving a blade, while Kikuchiyo is the drunkard with a frustration and passion fueled performance. The two of them are great whenever they are on screen.

When you have over seven characters to establish and grow, this is how you do it. With over 200 minutes. If this film was released today it would have been the same massive success. Climaxing with a drawn out, muddy, rain-drenched battle of wits and strategy as seven men take on dozens and dozens of mounted foes, all wonderfully filmed and choreographed. It is easy to forget you’ve been watching for over three hours, which is impressive. As easy as it is to forget how recycled cinema has become since.

Want to experience cinema history, want to learn a bit about film-making. Seven Samurai has to be on your list. 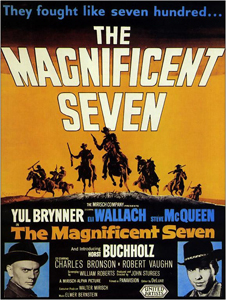 I’ve only seen this once before when I was younger, and yet I still had a little nostalgia pang!

A Mexican village is raided by bandits for everything they have, the bandits believing they need the supplies more than the poor villagers. But not prepared to take this lying down, the villagers go to find guns… only to find gunslingers instead, who agree to defend the village.

What is it about remakes nowadays compared to remakes of old? I am very critical on most remakes, especially ones that remake films from other countries and have cultural themes from that country. Yet, 1960’s Magnificent Seven is probably one of the few films that actually does it well.
While the star-studded American remake does have some of the beats of Kurosawa’s film, it deviates enough, and changes the paradigms of its characters enough that it becomes its own thing. Specifically, this is a Western through and through.

Asides from the clear difference in setting, other differences are pacing and the villains. In the 1960’s film our villain is established, and is recurring throughout the film, as a man with clear motivations. Possibly a mark above Kurosawa’s picture.
The characters are a little different too. The original’s Kikuchiyo persona is mixed with the youngest character of the seven to make a new character, for example. This is a rewarding element to see in a remake.
In terms of film-making, I felt it dragged slightly somewhere in the second act. Initial introductions to Steve McQueen and Yul Brynner’s characters is  dynamite, and their performances never cease throughout the story, especially Brynner, who is born for roles like this (unquestionably the interpretation of Kambei’s character) and the film’s climax is one of the most exciting pieces of Western action put to film. Very well choreographed and easy to follow.

It isn’t as seamless or as timeless as Kurosawa’s masterpiece, the soundtrack goes from fantastic and exciting, to a little cliché. The romance subplot is even more shoehorned than in the original.

Check it out for some classic Western fun. A well made and honestly well forged “remake” before remakes were a dime-a-dozen. 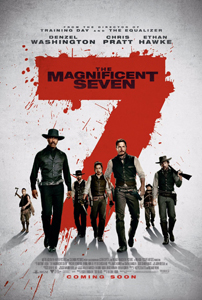 By no means the worse remake ever made, it does however feel clumsy and bullet riddled with clichés. Kurosawa would be rolling in his grave.

A rich baron oppresses a small town due to its proximity to a gold mine, threatening to take the town and the villagers’ lives if they don’t leave for little to no money. A widow of an executed man goes to find help, and returns with a group of seven rebels who have agreed to fight for the town.

The sledgehammer argument for the 2016 remake is: If you don’t like this because its a remake, well you must hate the 1960s classic too! Well, there’s a simple logic opposing that. Kurosawa’s original dealt with feudal Japan and samurai. The 1960s film brought that tale into wild Western America. Two distinct worlds. A worthy cause if any for a remake.
The 2016 film is less worthy at face value.
That’s not to say its terrible and deserves to be ridiculed for it. This isn’t the shot-for-shot remake I was afraid it would be. Even the characters are different; the paradigms have been shifted yet again, which is refreshing and keeps some of the stakes high for those of us familiar with the predecessors.
Denzel Washington and Chris Pratt lead the charge as Chisolm and Faraday (the Kambei and Kikuchiyo characters, respectively, ala Seven Samurai) and are best performances involved. Frankly, I don’t think Chris Pratt can fail; even when a film is bad, he seems to get out unscathed. Ethan Hawke and Vincent D’Onofrio and Byung-hun Lee fill out a fairly impressive cast.

But, 2016’s Magnificent Seven is only good on the surface. For all its flashy whiz-bang gun battle finale, the writers and creators didn’t appear to know how to set up the scene. The first act of this film is a disaster; characters virtually pop into existence, perhaps the worst offender is the Comanche native American of the group Red Harvest, who gets next to no explanation or any real interaction with the others. You’d think there’d be some tension there! Not to mention there’s a sequence of our heroes passing through town, and every single Western cliche is on show. It was actually embarrassing.
The film is over two hours long, and yet feels rushed. Sure, compared to the two juggernauts that preceeded it, that isn’t exactly fair, but the editing and pacing was all over the place. “When is the gun battle?” the tired audience asks itself.

While the characters are underdeveloped and over-acted (I don’t know what Vincent D’Onofrio was channeling here…) the divesty was a good move. The seven are all distinct (albeit only on face value) which isn’t as easily said about the older films.
Haley Bennett (who looks startlingly like Jennifer Lawrence for some reason) is a good alteration from the originals, in fact I dare say she is perhaps the most interesting. Not only providing a heroine of sorts (although never out-shines the Seven) not only does she not fall into the romance subplot, but she also gives a stronger tie between the victims and the Seven. Better than the first two films.

Ultimately, Magnificent Seven 2016 did not disappoint as greatly as I thought… but it really didn’t live up to the name it has. Westerns aren’t just cliche, and despite a few noble changes and improvements, it just proved to be rather graceless and shallowly entertaining.