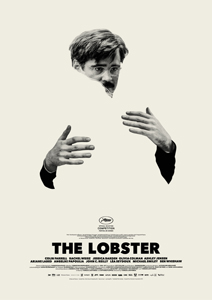 What a bizarre experience, this might take some time to unpack!

Set in a dystopian future, single people are rounded up to live in a hotel with the goal of finding a partner within forty-five days. If they fail, they are turned into an animal. Those single people are also tasked to hunt down and capture other “Loners” to continue the cycle.

Director Yorgos Lanthimos has crafted a bizarre and multi-layered drama… romantic… comedy… Question mark?
There are so many different themes and ideologies flying around in this film, so many messages to be taken away from the experience, I actually struggle to grasp all of them. The film doesn’t help you either; it wants you to think about it.
Colin Farrell plays David spectacularly well, a man recently divorced and – presumably – taken to The Hotel (against his will?) to find a new partner. He is removed of all his possessions, given a small room (described by the manager as a luxury room) generic clothes and of course… twenty tranquilizer darts. All he has is his pet dog called Bob.

The film has a bizarre quirky humour, and nails a consistent awkwardness throughout, almost unbearably so. Everyone and I mean everyone in this film speaks with a tremendously monosyllabic tone, those in charge are brutally blunt and unfeeling and everyone else is shy and incredibly awkward. This makes the film feel incredibly long, for two hours, I honestly thought it was about to end several times but it just kept going.

It is filmed wonderfully well, it has good pacing and the overriding theme (I believe) of relationship norms, societal shackles and individuals’ need to pretend to be someone else to find love. Perhaps the most glaring example is David’s “romance” with the literally named “Heartless Woman”, just to escape The Hotel. There are other women and naturally David’s incredible awkwardness and sexual desire is transparent to her, it is perhaps the most random and plot-convenient for the story.

I’ve watched films about psychic tyres that can pop people’s heads, so a film about a man under threat about being turned into a lobster is acceptable to me now. But I imagine general audiences will be bored to their back teeth with it. Personally I found it intriguing and was surprised at how the “transformed into an animal” gimmick wasn’t used in a ridiculous fashion; in fact it was used as an omnipresent threat. In short, you don’t see anyone literally turn into animals!

So if you like your independent films and a new look into dystopian futures, as well as being a British production with a deliberately awkward sense of humour and comedic timing, check out The Lobster.

It is one of those films that leaves you to think about it and what it means, there are multiple interpretations and I cannot tell you all of them. If you aren’t one for those sorts of narratives, you might have trouble!

I am certain you haven’t seen anything like it before.