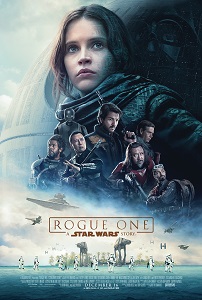 Rogue One: A Star Wars Story is a gift to all fans of the franchise and sets an inspiring precedent for Disney and LucasFilm’s efforts.

Set before the events of Star Wars Episode 4: A New Hope the story sees a young woman, Jyn, roped into the Rebel Alliance due to her connection to the evil Empire. Her father helped design a super weapon, The Death Star, and the Rebels need to find a way of destroying it.

For me, there’s a lot riding on Rogue One. Not only is it Disney’s first of many “anthology” films, which they have scheduled to release bi-yearly and eventually yearly, but also because I had little to no faith in director Gareth Edwards. He was a strange choice for such an important project, having debuted with the dull Monsters and continued with the divisive 2014 Godzilla. Both times showing signs of inability to direct actors.

However he has redeemed himself, in my eyes. Rogue One is a bombastic, exciting and surprisingly compelling ride, bringing Star Wars into a much darker, intense light. It does what even Lucas himself failed to do with his prequels: it has added to and strengthened the originals.

It is clear, even from the trailers, that a lot of love has been poured into the look and feel of the film. Further than even JJ Abrams’ The Force Awakens, this film lives and dies on its appearance as it takes place the equivalent of days before the first 1977 movie. Possibly my favourite aspects of the film are the technology, the sets and the costume designs simply because it all fits with the universe many of us grew up with.

Felicity Jones plays Jyn Erso, daughter of Mads Mikkelsen’s wayward Galen Erso, and her character is wonderfully portrayed; a strong woman reluctant to join the cause and whose sole drive is to find her father. I might say that Jyn, at the time of writing this review at least, is more compelling than Rey from TFA.
The supporting cast are well rounded enough for it to work; they all carry a bleak, but steadfast strength. Rogue One depicts the Rebels as browbeaten after decades of Imperial rule, with doubt, betrayal and extremists lurking in their midst; no one is inherently “good” in this movie. While doubt does lingers in every scene the characters are well conceived, there’s a good diversity in the casting and each has their strength and personality.
One should note that one of George Lucas’ original inspirations for Star Wars was Akira Kurosawa’s Seven Samurai; a ragtag group of warriors against impossible odds. This is no more apparent in Edwards’ film than with martial artist Donnie Yen’s Chirrut Îmwe and Wen Jiang’s Baze Malbus.

There are a lot of nods to the originals. Rogue One feels more like a film for the fans than an outward blockbuster like the episodic entries are. Some are slightly unnecessary: R2 and C-3PO show face, as do Walrus-Man and Dr Evazan. However Darth Vader does feature and does not disappoint, still carrying all of the gravitas he had nearly forty years ago.

Wow, sure sounds like a good movie right?
Well it isn’t without some flaws. The principle problem for me is the start. Rogue One starts out very awkwardly and is excessively edited. Within the first fifteen minutes we have been to four planets and are introduced to several key characters, without any setup, during isolated scenes that frankly don’t run together at all smoothly. I’ll be honest, I was a little worried at first. There are a handful of scenes, also in the first act, that really don’t feel necessary and could have been done less invasively through other means.
Did you know the late Peter Cushing returns as Tarkin? That’s right… CGI-Peter Cushing is a thing and damn it; the technology is nearly there but I know, I know, within a few years, that ambitious move will look outdated, as great as it was to see that character return.

But, as I suspect a lot of people will agree, the film’s second and third acts are dynamite and make you forget some of the first’s shortcomings! This is an excellent start to future expansions of the universe. As a fan it was a joy to see returning faces, vehicles and ships lovingly featured and to see a story woven into the overall tapestry with care and respect!

Star Wars fans rejoice, this isn’t stepping on any toes but is in fact a new story that strengthens the story we first watched, adding even more gravity and goosebumps to our childhood memories.

Additional Marshmallows: I could go on and on about geek facts, but one thing I did notice was the mention of The Temple of Whills! “The Journal of Whills” was never formally introduced into the film franchise canon, but George Lucas originally had it as a primary element in his lore. The ridiculous working title for 1977’s Star Wars was in fact, if you can believe it:

“The Adventures of Luke Starkiller as Taken from the ‘Journal of the Whills’: Saga I – Star Wars”