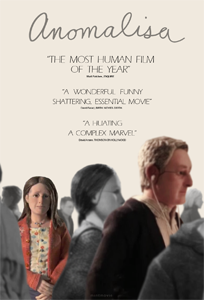 What an incredibly moving, compelling and strange experience this was.

Michael Stone is a writer successful in the field of retail and sales but is suffering from a crippling sense of apathy and loneliness in what to him is an incredibly mundane existence. But could all of that be about to change when he visits a hotel before a conference?

I knew very little about Anomalisa going in, only that it was being highly praised, I didn’t even realise it was a Charlie Kaufman project (Eternal Sunshine of the Spotless Mind) released this year in the UK, I am glad I caught it.
The film is fully animated in stop-motion animation with highly detailed, human looking puppets and at first has something of an eerie, unsettling vibe. Audiences wouldn’t pick up on it immediately, but every character other than Michael (voiced by David Thewlis) are voiced by one guy, Tom Noonan. Even the women! Every other puppet has the same androgynous face. It is eerie and very strange. But when Michael meets Lisa (voiced by Jennifer Jason Leigh) he of course has an immediate attraction to her.

The film is a simple affair; it was originally planned as a forty minute short and was in fact created from a Kickstarter campaign. It almost entirely takes place within a hotel and everything is seen from Michael’s perspective, by design.
Michael is not all there; snappy and awkward towards most people he meets, but while he confuses and torments others we the audience see him as simply lost and frustrated. He isn’t a cruel man, even if he does things bluntly and without finesse, he is simply desensitized to everyone around him.
That is the meat of the ordeal; losing one’s self when everyone around you seems bland and uninteresting and the risk of falling into a spiral of depression. Michael’s background of retail work and his apathy for people probably strikes a cord with a lot of people!

It is a gorgeous movie too. It is well crafted, the puppets are surprisingly capable of expressing complex emotions while simultaneously delivering the film’s theme better than if it were live actors. This may not be Kubo and the Two Strings quality of stop-motion, but Anomalisa is far and away the better story and its deliberate limitations are positive boons for the message and tone it is enforcing.
There isn’t a scene that feels unnecessary; every one expands upon Michael’s neuroses and inner thoughts, as well as the subtext of society. I tried to find something wrong, but the more I thought about it the more the puzzle pieces fell into place.

It is an extremely human story, especially in our modern society and yet it isn’t sledgehammering anything over your head. It is compelling, incredibly sad, yet important. Maybe it is just me, but I think everyone can find something from Anomalisa.