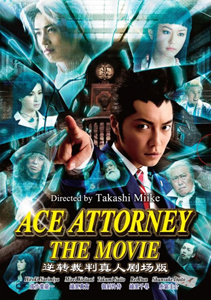 What, this wasn’t the video game adaptation you were expecting today?

Ryuuichi Naruhodou is a young defense attorney at law, literally working his way out of the broom closet, he finds himself embroiled in The DL-6 Case, a case that involves mysticism, the murder of his mentor and the implication of a childhood colleague. Through wacky hi-jinx and help from the most unusual of places, can he get that Not Guilty verdict??

Ace Attorney: The Movie is an adaptation of the “Gyakuten Saiban: Yomigaeru Gyakuten” video game series, more commonly known as “Phoenix Wright: Ace Attorney”, released back in 2001. The game series is extremely successful, hosting six principle game titles on Nintendo’s handheld consoles the Gameboy Advance, Nintendo DS and Nintendo 3DS, as well as several spin-offs following secondary characters and in the fighting game “Marvel VS Capcom” and even “Professor Layton VS Phoenix Wright”! The games are so popular that some of the earliest Internet culture used phrases and imagery from the games.
You have no idea what I am talking about.

However, the film follows the events and court cases involved in the original game. While the player takes control of Phoenix Wright, or in this case Ryuuichi Naruhodou as this is a Japanese production, the film follows his perspective through the weird and slapstick comedy that occurs. The games are well known for their great comedic writing and colourful characters, all set with investigation, supernatural elements and courtroom “cross examination” of evidence. A bizarre juxtaposition of zany humour and analytical thinking.
The film doesn’t disappoint.
I don’t think the Japanese could have failed in making this movie, in fact, the director also made notable films like horrors Ichi The Killer and Audition! This is an incredibly zany, surreal and bonkers experience that does echo the quasi-American/Japanese hybrid world that the games invoke. Some of the game’s music even features in the film, which is great to hear and even original music for the film is surprisingly awesome. The characters are really well portrayed by Japanese actors (despite half of the characters in the game appearing to be American and others being German!)  Hiroki Narimiya does a great job as Phoenix/Naruhodou, giving tremendous energy and fun to everything he does. The film really does electrify during the courtroom “battles”. They even had the man who loses his toupee! Amazing!

The film doesn’t hang itself up on pretense or establishing characters; it just barrels through the events of the game with shotgun diplomacy. Who are these people? Where even are we? A parrot? If you don’t know the first game, you are going to be…
completely…
lost.
The film depicts the game’s events linearly, whereas the game has the events occur when the player character Phoenix needs to know. So even for fans, it can be confusing. Add to that one or two blatant changes, subtle or not, we still notice.

The games are about analysing details after all!

My only major grievance, and it is a hard thing to say because the film has such an endearing, excitable puppy energy to it, is that the film is atrociously filmed and edited. Wow. Scenes just start, no establishing shots, no segways, just bam, now we are at a lake and stuffs happening. The camera wobbles around, or worse appears fixed in place: characters will move out of frame, then return, or characters will forcibly move into frame because the camera remained set with the previous shot.
Which is so strange because the rest of the film has had real effort and attention to detail given to it. The characters’ costumes are near perfect to the game, the humour is so off the rails that it captures the game’s own lively, expressive sprite animations perfectly.

(It also doesn’t help that the subtitles in the retail DVD copy I had were garbage.)

It feels, despite its horrendous camera work, like what a Phoenix Wright game-movie should be. While I would have loved more setup of the characters, more establishment of the world and places and relationships and story, or even a whole new court case (not based off the game story at all!) I know it wouldn’t have felt like the games.

Ace Attorney is one for the fans, so don’t watch it if you aren’t one. It is nonsense, but it is happy nonsense!

Additional Marshmallows: Three cups!? Well… did you see this film try and pass off Hiroki Narimiya having trouble with a live parrot as deliberate improv?? Amazing!

Additional, additional Marshmallows: Play the games if you haven’t already, they are on Nintendo DS and 3DS, they are very good fun and require some brain power!