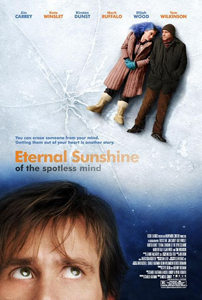 Alongside The Truman Show, this is probably one of my favourite Jim Carrey movies, principally because it isn’t a “Jim Carrey Movie”.

A lonely man meets a lonely woman, but when their relationship turns into fights and arguments she has him erased from her memory. When he is embittered to do the same… he immediately regrets it… can he hold onto his memories?

Writer Charlie Kaufman really does create some crazy works sometimes! Having watched Eternal Sunshine of the Spotless Mind before, imagine my surprise at rediscovering the impressive casting involved: Jim Carrey and Kate Winslet (obviously) Tom Wilkinson, Elijah Wood, Kirsten Dunst and a youthful Mark Ruffalo! (eight years before he was The Hulk) It is an incredible cast.

The film begins on Valentine’s Day, with a gloomy but thoughtful monologue from Joel (Carrey) talking about the futility of it all; thoughts that everyone has surely experienced. But in his stupor of regret and self-loathing awkwardness he meets Clementine (Winslet), an abrasive girl who he finds nonetheless intriguing, and what you think is going to be a standard fare romantic comedy/drama begins.
Of course, Kaufman isn’t traditional. The film is a reality bending, twisting turning experience that dives into the psyche of two people in love, using before-it-was-cool-Inception-like dream realities to convey it all.
The film spends a lot of time establishing Tom Wilkinson’s business of memory erasing, with Mark Ruffalo and Elijah Wood as nerdy technicians working for him. Much of the film takes place with Carrey’s character asleep and under the effects of their brain-meddling science, with him fighting the artificial amnesia being forced on his memories.

It is weird but also a very moving and compelling film. It channels the essence of two people living together, whose strong feelings for each other are both of passion and frustration over their differences. Carrey and Winslet give great performances, both during scenes of intense emotions and during all the wackiness they find themselves in.
The film initially threatens to bombard us with relentless negativity and hopelessness; why are these two together, why does Joel care so much for her? But masterfully Kaufman has written a third act that is compelling, fun, emotionally weighted and even a little action-packed that answers all of our questions!

The film leaves you quite bemused but also very content. The surrealism is entertaining but relevant and the emotions are real and palpable. I honestly don’t want to say more. If you haven’t seen it, please do; it is like nothing you have seen before.

[Where is the trailer? – The trailer for this film is terrible; it plays like an outright comedy which isn’t at all the tone of this film. So I am forgoing giving you any false impressions!]