The remake of the David Carradine 1975 film is surprisingly star studded and overall a good piece of vehicular entertainment.

In the heady future of 2012… Jason Statham plays Jensen Ames (“like the car”) an ex-con working in a steel factory who’s world is turned upside down when he is framed for the murder of his wife and brought in to compete in The Death Race, a legalised blood sport to kill off prison inmates for televised ratings. He must take on the persona of “Frankenstein” a popular “undying” driver of the games, if he hopes to gain his freedom.

Death Race is brought to us by director Paul W.S. Anderson (the Resident Evil films and Alien Vs Predator… you know, exceptional movies) and is completely a guilty pleasure. Imagine mixing Fast and the Furious with Mario Kart and Robot Wars and you are almost there. Heck, it even features Jason Statham and Tyrese Gibson who are now apparently steadfast stars of the Fast and Furious franchise now.
The film follows Statham as he is coerced into competing in an island prison’s destruction derby, meets his pit crew including the wonderful Ian McShane with a permanently baffled expression on his face, their hapless, out-of-place assistant Lists (whose gimmick is expressing things in list form) and his “navigator”/obligatory love interest Case. The prison is governed by Bourne Supremacy/Ultimatum’s Joan Allen, as steely eyed and unrelenting as always.

The film is all about the racing and the carnage that ensues, as well as the ridiculous goofiness of the machine-gun toting cars running over “pressure plates” built into the road to enable their guns and “defensive weapons”. Complete with sound effects and colour-coded lights. It is this stupid but entertaining personality, especially with the Death Race televised announcer being straight from a Paul Verhoeven movie, which channel the original 1975 film’s controversial and satirical flare. That and the ideal of “Frankenstein” and the concept of reality television gone off the deep end, gives Death Race, for all of its gore, bad language and testosterone fueled nonsense some actual mythos and unique personality.
The cars, chases and overall action is exceptionally real and visceral. Similar to what critics adored about Mad Max: Fury Road, there is little CGI here, its all metal and machine guns and expert car stunt driving. Top quality in terms of kinetic action.

Except for the shaky-cam. Oh god the shaky-cam. Anderson is insane; virtually every action sequence is a blur of insane edits, random shots, hard and fast zooms and shaking camera. The Bourne Supremacy four years earlier has a lot to answer for!
Jason Statham is playing every character he’s ever played. Which is fine. This remake is clearly content on being big, dumb and loud, I wouldn’t expect a Hummingbird performance from Statham here. But compared to its 1975 predecessor… I really find the other characters lacking. All of the cars are gun metal grey, different only in size, and their drivers lack distinct personalities to set them apart. We just watch to see them get minced by machine guns or run down by cars in a shower of gore.

But overall, I like Death Race. It is one of the few remakes that, while nowhere near as controversial as its originator (I think to do that film in a modern setting would have it banned from most cinema chains!) it is a fresh take on the concept and a fun modern take on the craziness.
It is loud, abrasive, full of rap music, often objectifying women, gore, spectacular gore, and really awesome vehicular design and practical stunts. 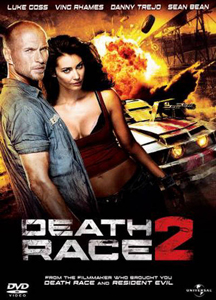 No one really asked for a sequel to 2008’s remake Death Race, but we got one, and it feels like two very different movies unwillingly spliced together.

Carl Lucas (Luke Goss) works for crime boss Markus Kane (Sean Bean) but when a bank robbery goes south Carl finds himself arrested and a cop killer. He is quickly taken to a maximum security prison where the inmates fight to the death in a televised blood sport. When the prison’s unorthodox collaborating company Weylan sees diminishing ratings, the sport is changed to a vehicle race around the island, called Death Race.

Yep, Death Race 2 is a prequel to the 2008 film, exploring the origin story behind the “Frankenstein” persona that the prison island Terminal relished in with its televised blood sport. Carl Lucas, played by Luke Goss (Hellboy 2, Blade 2) is a man wanted by his ex-mob boss, but is “safe” and “unseen” in prison. Once inside he has no interest in fighting or racing, only to commit to the cause in defense of the friends he makes: Lists (role reprised by Frederick Koehler) and Danny Trejo. Come on, he’s playing Danny Trejo.
The film benefits from having Paul W.S. Anderson on board as Executive Producer, meaning almost all of the vehicles and sets are reused from the 2008 film, so it still looks good despite having six times less the budget of the first film ($40million versus $7million) and Luke Goss isn’t a terrible replacement for Statham, although one can miss that ridiculously gravelly voice. Plus there’s almost no shaky-cam! The action is a lot easier to follow, although it is less kinetic and manic as a result.
Watching the two films back to back, Death Race 2 is simply an extension of the first, the action is much the same (and equally stupid) but that isn’t an overly bad thing. There’s a strange fondness for opposing driver 14k (Robin Shou) who is the only returning character from the 2008 film; a familiar face is great for the audience to latch onto. However, it is too similar. The story beats are almost exactly the same as the first film, the other racers are the same characters with different names in the same vehicles. There’s a definite sense of deja vu that feels toxic at the heart of the movie.

Our villain this time is Lauren Cohan (yes, Maggie from The Walking Dead) and she has none of the onscreen presence that Joan Allen had. Zero. While Ving Rhames is having a laugh as the man pulling the strings, Weylan. Probably the hardest part to follow of Death Race 2 are the villains, especially Sean Bean. I honestly have no idea why he’s in this film. His character never goes to Terminal Island… it feels like a totally different movie when it cuts back to him.

While Death Race had a 15 certificate here in the UK (even its extended version) Death Race 2 is a straight 18. This is mostly due to an increase of sex, nudity and suggestive content.

I didn’t really understand Death Race 2, and the similarities with the first film hurt it; it doesn’t have the 2008 film’s simplicity. But it was enjoyable to see an origin story of sorts for the Race and for Frankenstein, and while it takes a while to get going, the final stretch is entertainingly stupid.

The third Death Race movie is a continuation, but it feels like the tank is running low on gas.

Frankenstein aka Carl Lucas (Luke Goss) is almost free of the Death Race franchise with just one more race to finish to earn his freedom. But when the company is bought over by a megalomaniac intent on redesigning the Race for a global scale, the rules are about to change. Plus, is the legend of Frankenstein meant to end?

With a lot of returning faces, Luke Goss, Ving Rhames, Danny Trejo, Frederick Koehler, Tanit Phoenix Copley and Robin Shou, the third entry to the franchise is a lot more bearable than it has any right to be. These characters are established now and there’s even a bit of chemistry.
…
Or at least there should be.
There’s a huge continuity problem straight off the bat. Love interest Katrina sees through the Frankenstein persona at the end of Death Race 2‘s events; she knows it is Carl Lucas, they even joke about it. Now however, we get an ugly scene of the Frankenstein crew railing against Carl when it revealed he’s been hiding his identity from them. What??
But this film is rife with shaky character motivations. One minute characters are at each other’s throats, the next they are fine without any discernible reason. Also throughout the first and second acts, it woefully mistreats the importance of the Frankenstein mask; Lucas liberally takes it off when he really shouldn’t!
There’s also a ridiculous, ridiculous amount of female objectification. I think the only reason the character Prudence was in the film was so at least one woman didn’t have a tremendously low cut top and exposed midriff. It is the same as Death Race 2, an 18 certification mostly for sex and nudity.
While the action is okay, the vehicles are not as good. They look flimsy, not as solid metal as the previous films.

The film has three things going for it though: action and racing that finally breaks out from Terminal Island and resonating more with the 1975 film’s roguish, cross-country nature; its twist-tastic final act; and Dougray Scott chewing the scenery like Sharlto Copley as the film’s villain!
Wow, Scott is insane, completely hamming it up to no end, but at least he feels more threatening than Lauren Cohan, and his comeuppance is exceptionally well played! It was actually startling that such a good twist would be lurking at the end of an otherwise low-budget, clunky and gratuitous affair.
Shame is kinda soils itself with its own genius and massively overplays the twist’s implementation.
It also has some good opposing racers, mostly in the character of Psycho (Jeremy Crutchley) who channels a lot more of the 1975’s colourful and insane personalities that take part in the race.

Overall, for just having a $6million budget and as a sequel to a straight-to-rental prequel of a gratuitous action movie, Death Race 3: Inferno wasn’t that bad.