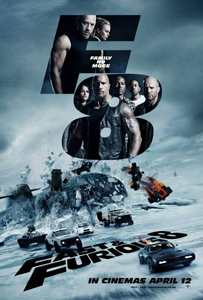 All principles be damned.

When a super hacker is bent on starting World War Three, stealing an EMP device and codes to nuclear weapons isn’t enough, she needs street racer and all around family guy, Dominic Toretto, on her side.

Oh noes, the trailer shows Dom turning against his “family”. Whatever is going to happen next?

The film starts out strong though. While the last three entries did pander to the series roots, it was often done with little to no regard – to downright having an old fashioned street race off camera! – here we get to see Dom (Vin Diesel) and Letty (Michelle Rodriguez) in Cuba, where Dom naturally gets into an argument with another guy and they settle it with a race. Dom is laboured with a wreck of a car, comedically falling apart, but we see him fix it up and jerry-rig it to win. Ridiculous, but down to earth and exciting, reminding us of what Toretto used to do.
Unfortunately I know from the trailer that a submarine and Tyrese Gibson get involved later.

As our ragtag team of nobodies are still being hired by Kurt Russel for intense missions that James Bond would normally take on, with sets and action sequences from a G.I. Joe movie (and murdering a lot of innocent people) Dom betrays them all and disappears into the night. Oh noes. Right in the feels.
So the team need help finding Toretto, and who better than a man requiring a prison riot and even more deaths to acquire, the same man responsible for murdering one of their “family” members, Jason Statham. Oh don’t worry, with this franchise’s dedication to the theme of “family”, I’m sure they won’t have us forgive him……………

The woman behind all of this and pulling Toretto’s strings is Charlize Theron, who honestly I was finding myself siding with at times despite her straight up killing people (but then, Statham is a good guy now, so…) as a hacker who can hack into anything. See everything, virtually do anything.
Funny how Dom can somehow wrangle random folk together and fool her so easily. Oops, spoilers.

So no, the writing is as preposterous as ever, the action sequences are unparalleled with stupid (Tyrese Gibson is dead. He just is) it has character motivations that Spectre was ridiculed for trying, and it can’t even set up Dom as a villain with any sense of urgency or gravitas. It is incredible that the film abandons so many rules, including its own, and just continues on its merry way “because it can”.

Admittedly, it is marginally better than Furious 7. While we do have to believe that street racers can raid fortified military bases, at least we don’t have computer nerds doing high level martial arts, or have a man who can literally teleport across the planet. For F8 of the Furious, everything before the submarine, and minus the prison riot (the obligatory WWE portion of these movies since The Rock joined) is good, solid Fast and Furious action with higher stakes.

If you like this franchise, or more importantly what it has become, good for you; I am sure you will enjoy this! It is more of the same.
For me, I just don’t understand how these films get a free pass every time. I was just slumped in my chair, watching the noise.