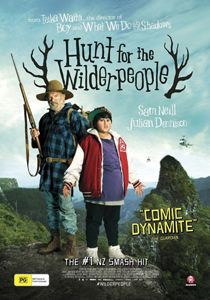 What a charming, quirky and enjoyable adventure.

In New Zealand, a troublesome child is sent by child services to live in the countryside with foster parents and maybe adjust his immature behaviour. From there a wild story begins with him and his foster uncle throughout the wilderness of New Zealand.

With director Taika Waititi being brought in to direct 2017’s Thor: Ragnarok for Marvel Studios, I felt it was necessary to catch up on some of his films and I am very happy that I did!
I’d like to keep this review simple. You ever want a movie that doesn’t require huge amounts of attention but has a lot of heart and entertaining performances, a pleasant and rewarding way to spend one hundred minutes of a quiet afternoon. The Hunt For the Wilderpeople is exactly that.
The film is narrowly focused on a stretch of New Zealand forest, and the integration of troublemaker Ricky (Julian Dennison) into rural life in a hope he might learn some humility and self-control. The wit and humour is on point. Ricky is a young boy with delusions of being a gangster, even going so far as to name his dog Tupac, yet he doesn’t have any understanding of what it is that makes someone a gangster. Dennison plays a naive young boy superbly. Beside him is Sam Neill (a favourite since Jurassic Park) initially vanishing into a big bushy grey beard as Hector, Ricky’s foster “uncle”. Neill and Dennison have such a great chemistry, an overly chatty child exploding with urban culture references forced upon a surly old grandpa who is the definition of reluctant yet constantly finds himself defending the kid.

The film does so much with so little. I really felt something for the characters, regardless of how archetypal they were (the plot sounds like Pixar’s UP, honestly) simply through their adventure. The adventure escalates when Ricky’s juvenile hall supervisor Paula (Rachel House, Moana) hears the child has been mistreated in Hector’s care and goes on what could only be called a crusade to “rescue him”. Paula is a cartoonishly evil character; outrageously angry and completely vindictive, accompanied by an unassuming policeman lackey. Her hunt for the two heroes is tremendous fun, especially when the wider country and television networks start to follow the drama.

It is a great little film where the story lies in the journey and not the destination. It is a story of delightful male bonding between two completely unmatched individuals; a kid who’s wilderness survival instincts is to steal toilet paper, and an old man who thinks “majestical” is a word. There are bumps in the road involving bizarre characters in the wilderness to exaggerate the wonderful New Zealand accent and our characters’ own personalities.

If you have a spare afternoon and want to watch something charming on Netflix, do watch The Hunt for the Wilderpeople. I don’t think you will regret it, especially if you like quirky but well made comedies.