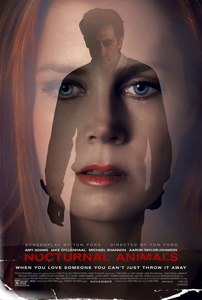 A great example of deep character writing. It will definitely benefit from repeated viewing.

An artist turn exhibit organiser received a book written by her ex-husband, the story it tells is both moving and unsettlingly personal.

With an awesome cast, Jake Gyllenhaal, Amy Adams, Michael Sheen and Michael Shannon, Nocturnal Animals is an unwinding psychological thriller that runs two stories parallel as a means to express its characters’ pasts and current trials. Amy Adams gives a great performance as Susan (hard to believe she starred in Batman Vs Superman in the same year) a woman who we are introduced to as someone clearly haunted by her past, living a passionless marriage and a lifeless profession, all the while holding herself to impossible standards. When a book arrives for her, titled Nocturnal Animals, and is written for her by her ex-husband, she is awestruck by the story of desperation and loss.
Jake Gyllenhaal plays both the ex and the protagonist in the story; the film prioritising his appearances only in flashback but mostly in the story “Nocturnal Animals”, we follow both Susan’s life and the story she is reading. Of course, Gyllenhaal gives a powerhouse performance here, as does Michael Shannon as a Texan police officer in the story. The story itself is grim, reminding us a little of Gyllenhaal’s other film Prisoners.
To say more would be to go into spoilers, and the less you know the better.

As the film progresses it becomes increasingly more interesting; it is a slow burn. It is a ponderous, haunted and unsettled experience, and while it is a little hard to get into the payoff is exceptionally well worth the wait. Early on, characters can appear (and sometimes are) archetypal, you will peg their characteristics almost immediately, and honestly, the first half the film suffers a little from this and the closeness it keeps its cards to its chest.
The book Susan is given, Nocturnal Animals, and the events inside it that we witness, don’t hold much weight early on. There’s no build up or establishment of the characters within, you simply find yourself thinking: this daughter is really stupid. But as the film develops, you find these shortcomings aren’t as relevant as first thought (however, the cut away from dramatic scenes to Amy Adams reading and gasping in awe and wonder, felt a little trite).

But when everything comes to an end, it is a mercilessly crafted story and absolutely full of incredible cinematography, performances and editing. It didn’t quite get under my skin as say Gone Girl did, but I suspect with repeated viewings this could be as devious and as clever.