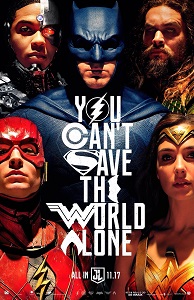 Well here we are, DC Comics and Warner Brothers big event. All the heroes together, a future spanning ahead of them… and while it has moments, it is still a mess.

The Earth is without its Kryptonian protector and under threat from beyond. Bruce Wayne and Alfred have been studying the increase of Parademon attacks in Gotham and realise that they need a team to fight back. While Diana Prince is known to them, other heroes need to be recruited, before they run out of time.

I really want the DC Universe to succeed. I really do. I am not a hater or a Marvel fanboy, but I do appreciate well written and well directed movies. Justice League, unlike its disastrously misguided predecessor Batman Vs Superman: Dawn of Justice, is not brimming with dour and directionless brooding, but it is desperately trying to make good with what its been given. Like a good idea clawing its way out of a pile of rubble. Some of the music choices even seemed deliberately evocative of this.
Speaking of music, my ears picked up Danny Elfman’s Batman score from 1989 and the Superman score from 1978! What’s going on here? A play for nostalgia from superior movies?

The film itself definitely starts out on the wrong foot. It editing is completely shot. We get scenes introducing and developing Erza Miller’s The Flash, Ray Fisher’s Cyborg, Jason Momoa’s Aquaman and our new baddie Steppenwolf broken up into fragments; where we could have had an emotional connection with Fisher’s tormented teen Victor Stone, they inject a whole sequence of Steppenwolf which itself is fragmented. Why? It is disjointed. We know an invasion is coming, you don’t need to cut away to show it again, just pick a sequence of scenes and run with it; you can’t show both simultaneously.
For me, Cyborg is probably the most interesting but criminally shortchanged character in this film; he is incredibly important as he is connected with the magic mcGuffins the Mother Boxes and he becomes the exposition/deus ex machina device towards the end of the movie. He literally gains powers between scenes. Yet, he gets around ten lines of dialogue that are supposed to make us understand him. But no real arc. The Flash too is reduced to quips and many, many slow-mo sequences.
Jason Momoa… he has a shirtless scene and then later poses on the Batmobile.

So the first half of this film is a frantic montage of DC potential, but doesn’t linger long enough on any of them. Then, bizarrely, the film gets interesting for a moment, the moment when (big shock) Henry Cavill’s Superman is revived. While character dynamics are tentatively shifted from their 2015 brooding when this happens, it felt a lot more engaging and fun.
It didn’t redeem anything from Batman Vs Superman however…

Then there is Steppenwolf… and if DC Comics had any opportunity to one-up Marvel they utterly failed here. He looks like a CG image of a melted Liam Neeson wax work. There is so much CG here, too much. I critique Marvel for having too much (and they are getting worse for it) but I don’t think Steppenwolf was ever a practical costume. What does he want? What is his ultimate goal? Power, the world. Etc.

The Justice League movie is an awkward experience. It isn’t something remarkably off-kilter as BvS, but it almost feels… abused. The characters have chemistry (at times) they are dynamic and interesting (at times) and they have potential. But watching these movies… you can’t help but feel like it is misguided somehow, even at the best of times. Should Superman have died and come back? There was no emotional resonance when he returned, we didn’t feel Wayne’s admittance and guilt as heavily as we should have. Shouldn’t we feel more for Fisher and Miller’s characters than some cliche dialogue? Gal Gadot’s Wonder Woman is probably the most unscathed, coming off the back of a hugely popular solo outing this year and being the main standout last year.
There’s definitely been a change midway through production, a messy and desperate change. But unlike Suicide Squad or Fantastic Four, it is more of an undercurrent than a blatant gear change. Does everyone remember when this film was originally going to have two parts?? Yeah. Warner Brothers cut this from being two movies down to a single movie with the required runtime of two hours and no more.

The film makes me want to see their individual movies, for sure, which is maybe all it intended to do. It makes me hope that a better Superman film could be around the corner. But on its own, it is a noisy, rushed procession of effects and sizzle without any particular finesse or grandeur.

If you don’t know anything about the comics, this film is mercilessly unkind. You will feel alienated and lost. This, at worst, is too little too late to redeem the mistakes already made, but at its best it is a valiant attempt to have likable characters with cool showcased moments in a growing universe.

Additional, additional Marshmallows: Henry Cavill’s CGI upper-lip (read about it) was far too distracting. I think most of Superman’s scenes were reshoots.