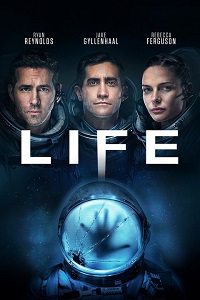 A competent claustrophobic sci-fi horror, but it does require a lot of suspension of disbelief to enjoy.

A damaged reconnaissance probe returning from Mars returns to the orbital station above Earth so that scientists on board can study what it brought back. But to their surprise and initial joy, the probe brought back signs of extraterrestrial life…

Released in early 2017, Life was criticised by audiences but appreciated by critics (sound familiar?) and this reviewer decided not to see it. But since we are nearing the end of 2017 and I am intent on catching some of the strays, I wanted to see for myself.

Starring Ryan Reynolds (Deadpool), Jake Gyllenhaal (Nocturnal Animals) and Rebecca Ferguson (Mission: Impossible – Rogue Nation) it is a competently cast movie, as well as being a very pretty movie to look at; the film opens with glamorous vistas of space and the station that would provide the only location for the story. I like claustrophobic, singular location films, Life takes place 99% of the time on the station, which is what you need in these pressure cooker experiences.
This is a horror film, first and foremost. In fact it does very well with some gruesome scenes and body horror elements (albeit CG body horror), which all took me by surprise. The computer generated effects were acceptable, but as usual they were most effective in low light conditions (which of course, do happen). The pacing is good, the start of the film actually has a lengthy pre-title sequence and we get to know our characters well enough before things start to go wrong.

Start to go wrong in a good way but also a bad way… As usual with science fiction the story needs to commit some sort of irrational action on part of the characters to make a story happen within its own logical limitations. This sort of thing is frustrating and takes audiences out of the story immediately: “Why did they do that?” “Why not just do this instead?” “A little late to think of that.” are all things the viewer will think during the catastrophic events of Life.
While there are worse examples (Alien: Covenant is a literal prat-fall down a ski slope) Life has contemporary, or at least near-future settings, which make the slip-ups all the more noticeable. But there are often real emotions getting in the way, which when looked at from a perspective of contemporary people and not space explorers hundreds of years in the future, can be justified.
But the main problem that never goes away, regardless of how many reasonable excuses you make… quarantine. These characters completely disregard ironclad logic of quarantine and as soon as they do, people start dying. These characters also, under controlled circumstances, realise what the alien organism needs to live and observe it completely shutting down when deprived of these things. They never consider these options until far too late. Which is incredibly frustrating.

Like a lot of science fiction, it is easy to nit-pick logic holes and problems, especially when the film is intentionally designed to be somewhat “intelligent”. But Life is a good, creepy time. Jake Gyllenhaal is the MVP of this film, as he often is, delivering one of the more subtle and unique performances that feels like it has an actual arc. An arc that makes a rather silly ending almost forgivable. The creature design was cool, the set and production value was solid and the score was effective during the escalating dread.

If you like science fiction and horror, check this out, but be warned that you need to reserve some criticism and suspend some disbelief to enjoy it. It isn’t overly silly or badly written, we feel some sympathy for the characters during their plight, it just doesn’t have the correct turns in logic that it should have.