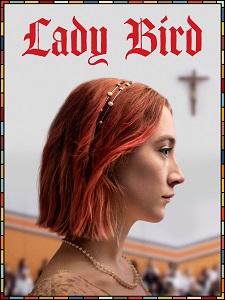 A compelling, meaningful coming of age story, full of honesty and blunt humour.

Christine, raised and living in Sacramento, California, dreams of escaping her backwater life and controlling mother despite not having the grades at school to allow it, or the money to afford it. But while she angrily protests and rebels against established social norms, life will prove itself different to what she expects.

Lady Bird is a delightfully honest story about adolescence and the ignorance of youth. Set in 2002, we follow what can be a very relatable story of “the lost generation” that came after the Baby Boomers. Coddled and protected, this generation believed they could achieve anything and that the opinions of others can easily bend to their own, while their parents are often practically minded, if not bluntly honest from their own post-war family upbringing. The film captures a mother-daughter relationship in this regard perfectly, with the two living in chaotic harmony with each other; neither understanding each other, yet both in need of each other.
It is a story about accepting the gravity of real life, and appreciating the things you have, without being heavy-handed or saccharine about it.

Of course, a lot of Lady Bird takes place at High School, and some story cliches are expected (from crushes on teachers, sexual awakening, cliques, general backstabbery) but the performances from everyone elevates it out of mediocrity. Even if Saoirse Ronan looks ten years older than the age she’s supposed to be, she gives a great depiction of a brat with big dreams. The film has a sharp wit and writing style, perhaps sharper than any mid-to-late teen could possibly muster, but the intention is clear and would spark many familiar feelings in most audience members.
This is coming from a male perspective. Lady Bird is a girl’s perspective, written and directed by Greta Gerwig, it is clear a lot of passion and humanity was poured into the characters. The film is only ninety-two minutes long, yet the film has well realized characters depicting what was a turbulent time between generations, when western society was changing and slowly accepting people for who they are.
The relationship between Ronan’s Lady Bird and her mother, played by Laurie Metcalf, is beautifully honest, a twisting dynamo of intense arguments, optimism versus realism, and love. How it concludes is heartbreaking and refreshingly genuine. Then there is Lady Bird’s dad, played by Tracy Letts, who is a lovable example of unconditional love and support.
“Just because it is ugly, doesn’t mean it isn’t natural,” is something Lady Bird says, and while the point she was making was headstrong and unwise, the words still have resonance. Her arguments and rebellions across the film may be seen as ugly behaviour when viewed in a designed narrative, but these things are indeed natural.

The film isn’t all emotional ire. It has some great little moments. When their Catholic School’s drama class gets a substitute teacher… the football coach… who believes a play can operate the same way as a play. Or when Lady Bird turns eighteen and proceeds to buy everything previously unavailable to her…

Despite the female perspective, I took a lot away from this film. You would need a heart of stone to not appreciate a lot of what this film has to give, from the perspective of a daughter, mother, father or a best friend. I was amazed at how much can be said in one hour and thirty minutes when it is skillfully written. It isn’t a bore, it isn’t predictable, it isn’t even deliberate or manipulative; it is honest and open-minded.

You can take whatever you want away from it.