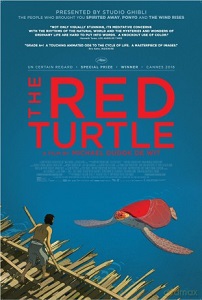 A man is stranded on an island and desperate to escape, but he meets a mysterious red turtle and his life takes an unusual turn.

Metaphors and hidden meanings in film are a good thing, in fact films that force the audience to think and make up their own minds should be encouraged. The Red Turtle, co-created by Studio Ghibli, is not the same experience as Ghibli’s wider releases (avid fans of the studio will already know this) as it is, effectively, a silent movie. There is no dialogue outside of grunts, shouting and various emotional outbursts. The film is a slow and methodical experience as we observe this man learn his surroundings and cope with the situation. The art style is beautiful yet painted, two-dimensional animation (with the ocassional 3D asset added at times) these things may put off more general audiences looking for a fun animated story for the whole family.
Indeed, the film is a sad, morose affair. Our character is lost in an almost purgatory state on a forested island, every time he makes a raft to escape, it is inexplicably destroyed and he is forced to return to the island. The art style is muted colours, washed out greens, blues and browns with stark line work to define everything, making the film feel isolating and desperate.

Unfortunately, it is hard to describe more of the film without giving crucial aspects away and defang the more surreal and mysterious intentions it wants to have. Sufficed to say, the film goes to some peculiar places, and while avid movie goers might have a clue: “man isolated and alone on an island” tends to bring certain cliches and narrative devices to mind… no, this story adds unexpected extra layers.
Which is where the film feels a little too vague. It speaks of many subtexts and possibilities, acting as metaphors for many things; life, regret, the destructive nature of man, the destructive circle of life, or even just simply desire for home and belonging. But there’s never a particular point where the story says: “Among all of these, this is the message you should take”. Which feels a little unrewarding.

Different people will take different things from it, that is an absolute certainty. It is a mysterious experience that keeps you guessing as to what happens.

What is clear, once our man is on the island, he meets little crabs out on the beach. These little guys are so cute! They add just a little bit of relief from the reality and the weirdness of the story.

The animation is really great, in a stylised and painted fashion. I was intrigued by the mystery and the lengths the story goes to add metaphor and analogies. But there were a few moments that shifted narrative gears too heavily which lost me; I had to adjust my perceptions of what the film was teaching me.

Not for the casual viewer; intriguing and beautiful for those interested in animation and the studio’s more cerebral artworks.