Man, I really wanted to like this movie more than I did…

Before the Galactic Empire built its super weapon, but after their regime had taken hold, a young man struggles to fulfill his dreams in becoming a pilot. Han must navigate across worlds of mercenaries, cutthroats and criminals if he hopes to find his way.

You can likely imagine this moment in being the first time that “modern Disney” has sweated in apprehension. While they’ve mostly made back the money they spent buying the Star Wars property with their first three films, they have still to turn an actual profit. They are even building massive resorts at Disney theme parks for the franchise. So when The Last Jedi released six months ago to a positively divided opinion, banking on Solo: A Star Wars Story probably wasn’t their first choice…
Why? Most prominently, midway through production, Disney fired the film’s original directors Phil Lord and Christopher Miller (The Lego Movie), deeming their style wasn’t what Disney wanted. Red flags immediately. Their replacement, Ron Howard (who is famous for slightly different movies than Lord and Miller… A Beautiful Mind, Frost/Nixon, Rush) took over. But the film didn’t have a trailer with 2017’s The Last Jedi, or even with 2018’s Disney/Marvel title Black Panther… with a mere three months before release, no footage was available. The Death Star was now firing red flags. 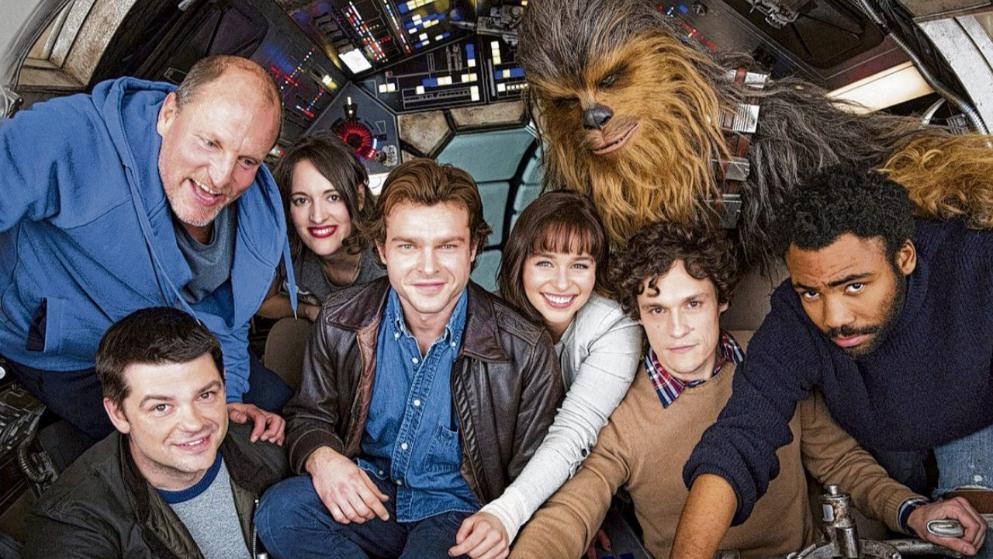 Now that it is finally here, burdened with having to support Disney’s hopes for a future in the galaxy far, far away… only time will tell. Even having now seen it, it is honestly difficult to know how it will be received.

With expectations so monumentally low, it certainly wasn’t as bad as the development hell would suggest, in fact it was a lot of fun. But it still isn’t the film it could have been… for one big reason.

Starting with the good. The film doesn’t ruin the characters, at least not too much. This isn’t like George Lucas making Darth Vader a kid who shouts: “Yipee!” It is mostly in keeping with established story arcs… mostly. Perhaps the best character arc development was how best buddies Han and Chewbacca meet, which, if you are going to do something right… it had to be that. In fact most of the new characters are really quite good, far more interesting than any of Rogue One‘s cast (well, K-2SO will always be in my heart). Early rumours are true; Donald Glover aces it as Lando Calrissian. Chewbacca is great to see back in action too!
Another element that was, frankly, gorgeous, was the creature and vehicle designs. Wow. This film nailed what the Star Wars universe’s criminal underworlds and fringe worlds would look like, from unpleasant child labor camps, the Imperial front lines and beautifully ornate criminal headquarters. Repeat viewings just for these, including the Han’s iconic space ship, the Millennium Falcon, which despite getting a “redesign”, a quick bit of (suspiciously overlayed) exposition explains its new look.
Speaking of the Falcon, there’s also an incredible sequence midway through the film that really puts the old girl through her paces. It definitely was as memorable and visually exciting as the Falcon’s debut should be.

There’s a whole lot of good I wasn’t expecting. The idea of a wild west frontier in space deserves good treatment, heck, it is almost fifty percent of George Lucas’s reason for making Star Wars in the first place. At least visually this film nails it on the head.

Now for what didn’t work. This could get into spoilers.

Poor Alden Ehrenreich. It is easy to feel sorry for this guy. Part of this film’s development hell was one: Ehrenreich looks nothing like the character’s original actor, Harrison Ford and two: apparently Ehrenreich needed acting coaching during filming. Hopefully this film’s reception doesn’t ruin his career.
It is impossible shoes to fill. Ford made his lofty career from playing Han Solo in 1977. He and Han have imbued each other to the point that they are inseparable. Sure, you can pretend its the same guy… squint your eyes a bit… but it really doesn’t work. At times, the charming rogue comes across, but mostly you see someone who isn’t Ford and isn’t Han Solo.
When does this film take place? How old is Han and his love interest Qi’ra (played by Emilia Clarke) because there’s a clear time jump in this film of presumably a decent length, yet these characters look no different. How soon is this before the events of Star Wars? It suggests in the script that it is not far behind! Then why is Han so young? (Harrison Ford was 35 when filming the original film, Ehrenreich is 29). How is the Millennium Falcon made so dirty in such a short space of time??
Into more complex matters now: Han is played too much like the good guy… At least, he is played like someone wanting to be a mercenary but is actually incredibly noble but doesn’t see it yet. It feels like a detriment to the character. In Star Wars he was more unsympathetic to the plight of others; he was a rogue and an outsider who wanted to be paid. Disney probably didn’t want an anti-hero film… they aren’t very good at those.

Also why couldn’t Han Solo’s name be Han Solo? Why did we need an origin story for his name? It is a name. Sure, this scene wasn’t implemented or conveyed as badly as it might have been, but come on. It felt so contrived by merely existing.
The film was also strangely dark. Not thematically or tonally dark, but the cinematography was constantly murky, annoyingly so. This made underground sequences hard to enjoy, and details in (what should have been) brighter scenes hard to appreciate. Watching the film on a brand new digital cinema screen, it is hard to understand why this film was shot so dark, especially with such wonderful design work going on. The direction, for a film split over effectively three people, was notably uninteresting.

It is a film of boyish adventure, of gunslingers and space ships and action. It rarely stops for breath, but at the times when it does, it conveys a good sense of character and an earthy, kinetic vibe that is lacking from the lofty episodic Star Wars entries. It has great vehicle and creature design. But at the heart of it… it isn’t Han Solo.

At first I wanted a Star Wars film like this, mercenaries, gunslingers etc, simply without Han… Now that I’ve seen it, I really wish we could have youthed Harrison Ford somehow. Does that mean I think this film shouldn’t have been made? Perhaps. It was maybe doomed from the start, but in the end, I didn’t feel like I’d wasted my time. It was fun.

Additional Marshmallows: This is probably as “MCU” as Star Wars has ever felt; with Solo dropping a really big surprise towards the end. This surprise is surely meant to be as appetising to fans as seeing Darth Vader wreck a bunch of Rebel soldiers was… But for me, it felt unnecessary. It felt like seeing exactly what Disney want to turn Star Wars into: a constant series of references to the original Lucas storyline, whether it belongs or not.

Additional, additional marshmallows: Yes, it is better than The Last Jedi.