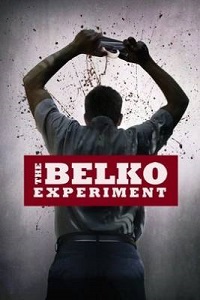 A contained horror that pitches normal people against each other.

In Colombia, the Belko Industries building, full of recruitment workers and desk workers, is suddenly transformed into a death trap when a mysterious voice locks down the building and forces the occupants into a fight to the death. Is there any way out?

The Belko Experiment was released in 2017, directed by Greg McLean (most known for horror Wolf Creek) but also written and produced by James Gunn (Slither, Guardians of the Galaxy) and is designed as a pressure cooker horror story. Like someone had merged Saw with the Hunger Games or Battle Royale. An average day at the office becomes a taut psychological study which becomes a terrible bloodbath, after the entire building is locked down and a intercom voice demands thirty people be killed, otherwise sixty random people will die.
It is an interesting premise, one that the audience can easily place themselves in and imagine how they would cope. But unlike a lot of other movies of similar design, The Belko Experiment does try to iron out the flaws and loopholes. For a start, when presented with the problem of “kill thirty of your group, or sixty will die”, a character openly acknowledges that it doesn’t matter whether they do it or not; the ones in charge of their torment won’t stop after thirty or sixty. When you have a film that revolves entirely around how people behave in tense situations, the characters have to show some intelligence. The film does quite well in balancing both psychology and its internal logic.

Quite well. There is some suspension of disbelief involved, of course there is. But the story does try to give reasons for these, and the acceptance of these reasons will vary between audiences.

There isn’t much to say about The Belko Experiment. It does fully dive into what a battle royale situation would be, more than the Hunger Games ever did; the people in charge do not give you options or second chances, they want you dead. But Greg McLean’s film doesn’t give a whole lot to care for in the characters involved… We instantly know who the antagonists are – the jocks, the alpha males – we have a good guess on who’s going to die because of how it will escalate the plot, and we know who the hero is. Like most horror films, the survivor is reasonably obvious from the start.
Apart from a couple of exceptions that, honestly made me a little sad, this film did not surprise me at any point. 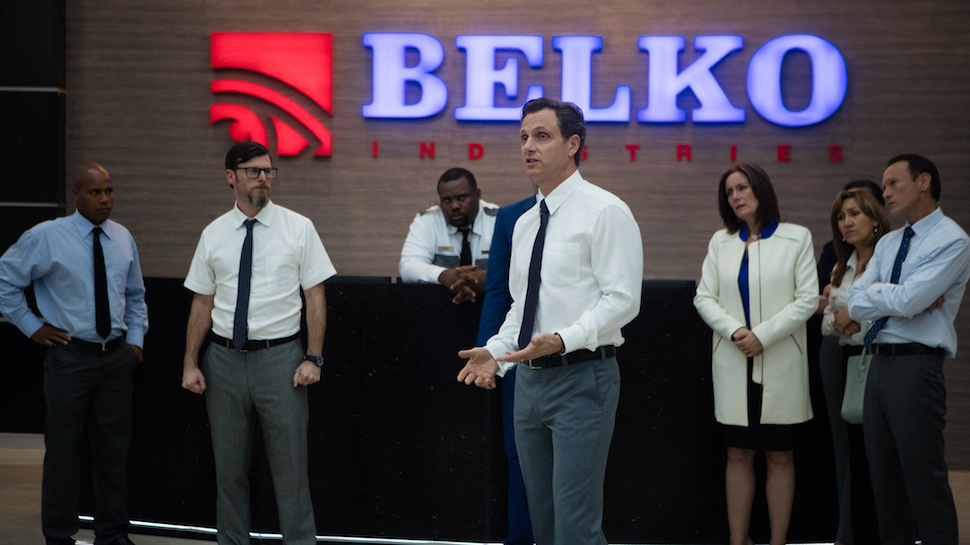 One of its strengths is how the film is populated by a cast of mostly nobodies. There’s no A-list actor who suddenly dies in a game-changing scene, and there’s a minute chance anyone might survive. Michael Rooker (Guardians of the Galaxy) John C McGinley (Scrubs) are the most recognisable faces.
But, none of them are really fleshed out beyond the tropes they embody. Tony Goldwyn as Belko Industries boss Barry Norris is perhaps the most interesting; a man who takes on the situation forced upon them with cold logic. Logic that no sympathetic human would take, yet logic that is understandable and relatable. Of course, his actions cause things to spiral out of control.

In terms of violence and gore, The Belko Experiment is quite graphic, at least in a realistic way. We are dealing with an office building with a limited amount of fire arms, causing people to resort to common office tools as murder weapons (a paper guillotine, for example) which leads to some gruesome deaths.
But when the blood starts flying and the carnage gets ludicrous, the film drops a lot of its psychological horror for a goofier, black comedy vibe. Using deliberate music cues and direction choices, the “point of no return” for our remaining characters is coloured with a perverse joy. It is a film that suggests there is no choice in our actions, perhaps echoing the psychology of working in an office to begin with. Whatever you might want to do, the Powers that Be are the ones making the decisions.

It could have used an ounce more character to drive more sympathy from the audience, and perhaps the tone could have been more consistent. There wasn’t much of James Gunn’s witty writing as one would hope, especially as he had solo writing credit on the movie.
But if you enjoy ultra-violent, psychological thrillers/horrors, in the vein of Saw and Japan’s Battle Royale, you will probably find something here. It was an okay distraction.