A smart-mouthed thriller set in a hospital for criminals, Hotel Artemis is a decent time at the cinema.

When their bank heist goes awry, two brothers take shelter inside a converted hotel ran by a nurse who treats the world’s top criminals and assassins. But when the leader of a crime syndicate is due to arrive at the hotel, rules are about to get broken.

Hotel Artemis is directed by debut director Drew Pearce and all things considered, he does a decent job here. He has a decent cast of recognisable faces at his disposal: Jodie Foster, Jeff Goldblum, Dave Bautista and Sofia Boutella to name a few.
There is something particularly enjoyable about a film that remains within one location, and this film sees our “protagonists” taking shelter inside the Hotel Artemis, not only to heal their wounds but to escape a riot taking place throughout the city. You see the story takes place in the near-future of 2028, where Los Angeles is suffering from the privatisation of public water supplies. But this is mostly used as a backdrop to our character’s situations. This future setting also allowed Jodie Foster’s character, The Nurse, to work almost independently through surgeries and other medical practices through the use of robotics and 3D printers.
Jodie Foster is a joy in this film. An intelligent but a little doddery nurse who has dedicated her life to helping people who society has chosen not to help. Despite being surrounded by hardened criminals and assassins, she shuffles around the hotel with impunity, giving orders and taking names as she goes. Her one member of staff, a hulking brute with a heart of gold called Everest, played by Dave Bautista, has tremendous chemistry with her. Without the script going into detail, there is a clear history between them. 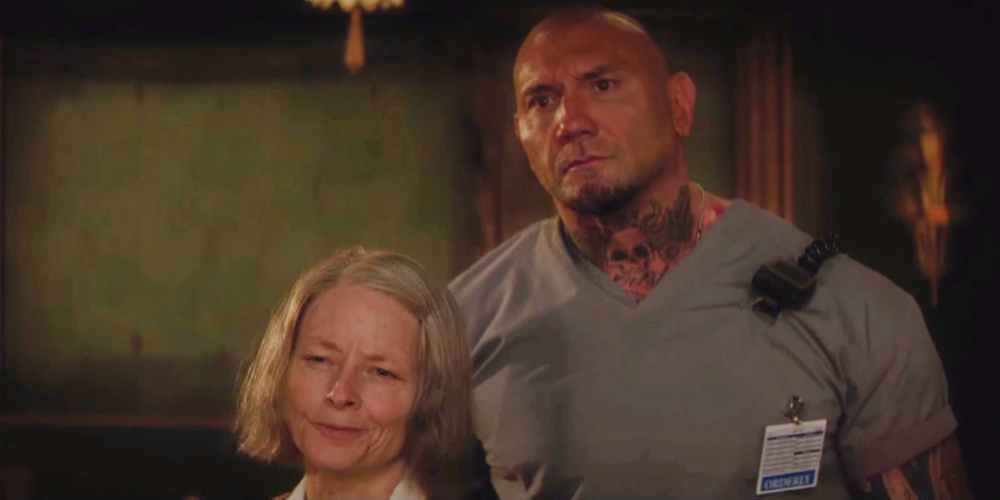 The criminals in the hotel include our bank heist brothers, played by Sterling K. Brown and Brian Tyree Henry (you may recognise Brown from the opening scene of Marvel’s Black Panther) and Sofia Boutella, an assassin skilled enough to kill someone with only a coffee mug. Most of them are familiar with the Artemis, and through dialogue we learn bits and pieces of the past and the mystery behind The Nurse’s convictions.
So it is a blessing that the dialogue is snappy and dry witted. Bautista proves that outside of Marvel he can still deliver a great deadpan joke. With the rundown look of the hotel and the riots outside of it, as well as the entire cast being criminals, the humour is a pleasant levity.
The action, when it comes around in the third act, is brief but excellent. Boutella proving yet again (with Star Trek Beyond and The Mummy) her abilities as an action star. The film isn’t long either, around ninety minutes, so the short exposure of action did not feel like too-little-too-late. In fact the pacing overall was very effective in leading the audience on.

There are, of course, some issues with the movie. Very early on we are introduced to a portable “vault”, shaped like a pen, that carries incredibly rare diamonds that are the property of the Wolf King, the head of a crime syndicate that basically “runs” Los Angeles. Bad news then that our brothers stole the pen and brought it into the hotel. But the issue resides in how the Wolf King’s arrival was not caused by the pen being stolen… in fact he arrives on the scene for other reasons. This causes extremely limited concern as the pen is barely referred to again! The audience waits and waits for a payoff, a reason for it to exist, but ultimately… the pen was pointless to most of the plot.

Charlie Day’s character was quite insufferable as well… but that was probably the character’s purpose; to raise the other criminals to John Wick status by comparison.

They say that if you can end a mediocre film well, audiences will forgive earlier mistakes (i.e. Rogue One: A Star Wars Story) and unfortunately Hotel Artemis ends on a whimper. This perhaps explains some of its negative reception.
But as a narrow focused action thriller, a unique screenplay, it was enjoyable for the most part. Everyone performs well in their roles and there’s good chemistry (there was even one part that you feel genuinely sad for the character).

If you have a spare ninety minutes, you could do worse. Just don’t expect anything too deep or thought-provoking.