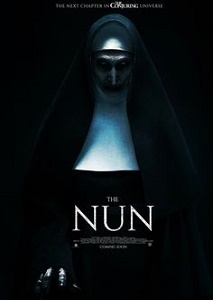 Ever felt like you needed an origin story for one of three random monsters in that stupid horror movie from 2015? Me neither.

Before the events of The Conjuring 2, the demon Valek tormented a chapel in Romania. When one of the nuns at the chapel kills herself, a priest and a young girl go to resolve the location’s disturbing past.

Debut director Corin Hardy takes the helm of this spin-off from director James Wan’s horror “universe” (wow, they actually use that term in the marketing now) and boy does it suck.
Welcome to Romania, where everyone speaks American. We are first greeted by the most blunt of excuses to unleash an unstoppable evil upon the world: Quick, open this door that holds the unstoppable evil at bay. Why? Because there isn’t a film otherwise! (An explanation comes, but it actually makes no sense if you think about it for ten seconds.) Then, we are at The Vatican, where a Mexican, an Irishman and an American sit and decide to send a hapless, untrained Nun to a dangerous, probably cursed, chapel. Why? Because there isn’t a hapless girl to spin the camera around, of course.

Next, we are greeted by “Frenchie”, called so as he is French, despite having a nondescript accent that wanders all over the place. He is Priest Burke’s and Sister Irene’s only guide to the chapel. He is also a terrible source of “levity”.

Of course, Priest Burke being a man who has seen possession before didn’t think, after seeing visions of a boy who has been dead for years, then being magicked into an open grave, which seals shut and buries itself… might consider it wise to return to The Vatican and say: We need more help with this. Nope.

The Nun is a bafflingly stupid affair. Which shouldn’t be surprising; it is an offshoot of a bafflingly stupid subplot in a below-average horror film. This is like degradation of the gene pool. The direction is amateurish. Once our characters get to the chapel, the film is stuck on “spooky” mode. The camera continually turns around characters, the music continually dips for a scare moment, their always something over people’s shoulders unbeknown to them. It is so continuous, so unrelenting, that The Nun isn’t scary when she properly emerges (asides from the fact we’ve seen her before in another movie). Don’t worry, she doesn’t actually kill you, she just yawns a CG mouth at you and you get blown back into a wall without injury.

The characters are flat, uninteresting and aren’t developed. They don’t go through arcs or surprise twists. They just wander around and commit to horror tropes regularly.

Generally when something as prominent as The Nun appears in a film already as clustered as The Conjuring 2, you assume there is good reason for it. When an origin story movie is written and made to explain her, you’d think it would be worthwhile… But no. This is straight up direct-to-DVD quality. Especially when it exposition dumps in the most spectacularly ridiculous fashion.

This film does not know what subtly, or ambiguity means.

There isn’t much else to say to damn the film anymore… Nor is there much to say that’s good about it. Suppose if you haven’t seen a horror movie, ever, you might find some of it scary?