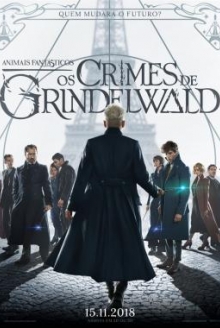 This film made me feel like a right Muggle.

With evil wizard Grindelwald escaping his confinement, it would seem only isolationist wizard Newt Scamander can find and stop him.

Is this what it’s like to watch the third Hobbit film without any prior knowledge of previous entries feels like? This film was hopeless for us non-Potter fans.

The “first” film, Fantastic Beasts and Where to Find Them, was based off a book that had no narrative structure. Series author J.K. Rowling has been writing the screenplays for these films (with the original intention of five Fantastic Beasts movies) and upon watching the first film in this spin-off series, it felt like a film of two parts: monster hunting antics, followed by an elaborate plot of secretive investigation and a terrible villain. It did not flow well.
Now, the story has boosted out of the monster hunting aspect almost completely; we follow antagonist Grindelwald (Johnny Depp) as he seeks to rally “pure-blood” wizards and witches into an army to oppress human dominance of the world. Our heroes are separated. Newt (Eddie Redmayne), and Tina Goldstein (Katherine Waterston) are at odds with each other, with a misunderstanding that Newt was marrying someone else, but in fact it was his brother. Then we have Jacob and Queenie, who’s great little witch-muggle relationship from the first film is torn apart within the first five minutes.
THEN we have all the other characters.
We have so many characters in this film. Far too many. The film rapidly descends into a game of Guess Who? Did Newt have a brother in the last film? Who is Leta Lestrange? Was she in the last film? Did I not understand what happened to that character in the last film? Did they just retcon something from previous films?

Who the hell is Nicolas Flamel and why is it a big deal!?!?

Don’t worry. Nothing is explained for us muggles. We aren’t worthy of knowing anything.

In fact, there are so many characters, returning and new characters, that Newt himself barely does anything of worth. The plot hinges completely on Lestrange and her important-never-before-mentioned-family-connections, and Albus Dumbledore (who luckily, most people will know). There’s a real sense of this franchise trying to shake off its awkward, animal encyclopedia roots as quickly as possible. Including Newt.

You could go on and on about the woeful pacing and zero compassion for the audience’s comprehension. Things happen. We move on without consequence or concern. Conveniently those things move our characters exactly where they need to be for the next thing to happen. How does investigating one person’s family history lead to a tomb which leads exactly to Grindelwald’s secret wizard meeting?

Why do wizards and witches have the power to teleport instantly, but don’t do it when the script demands it? Seriously, you left in a hurry. Why are you walking? Oh wait, so someone can run after you for comedy.

So many questions, and none of them are questions you should be asking.

Director David Yates returns, having worked on the “first” film, as well as other Harry Potter films. He certainly knows how to frame a shot; despite the film’s disappointments, the way it looks and sounds are on form.
The film does have some great moments, but they are often incredibly fleeting and absurd because of it. Paris getting completely draped in black silk? Tremendous image. Shame it literally lasts all of a minute and only begs further questions as to why it happened at all.
Jude Law as the younger Dumbledore is great. But, you spend all of your time wondering when this finely dressed, waistcoat-wearing gentleman starts shuffling around in bed sheets and a nightcap?

Thoroughly bemused by this one. Much like its laboured title Fantastic Beasts: The Crimes of Grindelwald, the audience will be spending more time perplexed, trying to understand this film’s intentions and story than appreciating any artistry or intricacy. If you aren’t a Harry Potter fan (as in, you haven’t got the films on loop at home and you don’t read anything other than the books) you can probably skip this one.

Additional Marshmallows: I write this review as a non-fan. But I have heard that even Potter fans are frustrated at this story’s developing habit of retconning the lore… If this is true, I am really not sure what worth this film has.