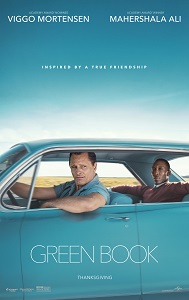 A story about the bonding of two very different souls. Captivating and greatly entertaining.

When a classical pianist looks to tour around the deep south of America, he hires Tony Lip, an Italian American brawler with very low opinions on minorities. When Tony discovers his fare is an extremely rich African American man, he realizes he has a lot to learn.

It is extremely hard to believe that the director of Green Book, Peter Farrelly, also directed Dumb and Dumber To, Hall Pass, and The Three Stooges. How can you explain that?

What is most captivating about this sure-to-be-Oscar-winning movie, is how simple it is. It is virtually a theatre play: Our two characters are on a road trip, so the majority of the film is set riding with them in a beautiful aqua-coloured Cadillac, stopping off at a location, before moving off again. Each repetition giving us more details and clues as to how these two very different men think, and developing the oppressive jaws of society, waiting to strike them at a moment’s notice. The title, Green Book, refers to a published travel guide of the same name which provided lists of locations that African Americans were allowed to visit and stay at.
For such a funny movie, honestly, the writing is on point for laughs, there is always a lingering sense of unease and tension. From Tony’s total disregard for the severity of racism in 1960s America, to Doctor Don Shirley’s sensitive, dignified demeanour, we know things are going to get worse on their journey. But the chemistry of these two is flawless. Mahershala Ali and Viggo Mortensen are a perfect fit for straight man and comic foil; two souls who have no interest in each other, slowly realizing that they have valuable lessons to learn from each other.

The two actors disappear into their roles. Mortensen delivers a good Italian accent and a magnetic personality, while also piling on the pounds, while Mahershala Ali is mesmerizing as an extremely reserved, sheltered individual. He is like a puzzle box, the script drops small hints between the lines; incredible talent but deeply tormented. They work superbly together, the chemistry just builds and builds, from the KFC scene to the scene where the good pianist teaches Tony how to write better letters to his wife.
The path to finding their shared humanity is paved with them supporting each other, somewhat reluctantly, with one’s strengths making up for the other’s weakness.

With our societies at often times trying to be more liberal these days, we enjoy the two characters matching wit, sharing each other’s ethics and passions. But then we have reality checking in, with Don Shirley (despite wearing a suit already) going into a store to buy a new one, at Tony’s suggestion, only to be turned away by the shopkeeper. Shirley quietly accepts it, while Tony doesn’t understand why; even though he himself had shown racist opinions, his time with the pianist has made him see the man as a friend. No different from him.

The film runs with this concept, and the performances are nuanced enough that the change is slow and believable enough. By the end, like all good dramas, we know these two men. We’ve seen them both at their highest and their lowest, and we respect and appreciate their friendship.

It is one of those films that there isn’t much to say about it, other than it is an exceptionally good and very enjoyable drama. The audience was immediately with the characters; there were a lot of laughs, all at the right times, and intense silence at the harder, or more sensitive moments. A sign of a well edited, well performed experience. Nothing felt out of place or lacking.

Highly recommended. Hopefully it wins one or two awards this season.