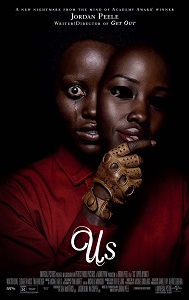 It is better than Get Out. There, I said it.

A family on vacation find themselves terrorised by mysterious doppelgangers, who appeared from nowhere and have unknown motivations.

The above statement that Us triumphs over director Jordan Peele’s 2017 debut Get Out is probably a personal preference. The trailers for that film really gave the game away; anyone with half a brain could figure out what was happening. With this new film, intentionally avoiding all trailers was the solution!

Certainly, Peele proved himself an incredibly talented director in 2017, shaking the horror genre with an original premise solidly executed. It did however, have a slight issue with tone; the comedy of that film felt forced and a little derivative compared to the excellence around it. Now, Us is a great example of modern horror movies, a hallmark surely to be copied and influential in years to come.
Why is this? Horror is a subjective genre, after all. Perhaps the most eye-rolling moments of horror films is when tropes occur, or when the sharks are well and truly jumped; they often become laughable, or predictable, or worse both. As much of a sin as it is to say, 2018’s Hereditary falls into these traps. But Peele’s newest work makes one clear decision: it is self-aware.

Is that to say it is a comedy? No. It has excellent dread, atmosphere, surreal visuals and a score not unlike classic horror movies. But when it does go far, when the craziness begins and blood starts flying, the film knows when to spark just a little bit of believable humour. This could just be characters sharing a knowing look in a moment of silence, or it could be louder, brasher bravado. This elevates the film from becoming too earnest, losing audiences by forcing them to accept unbelievable scenes as serious fact.
Of course, this may put off certain horror-fans, but there is more to Us than simply its self-awareness. It is also very creepy. The soundtrack is great, working harmoniously with the film instead of overtaking it. The performances are solid, Marvel movie fans may recognise two of Black Panther‘s memorable stars: Winston Duke and Lupita Nyong’o. Duke delivers the best of the aforementioned comedy, while Nyong’o is incredible balancing and portraying two very different personalities, as well as keeping the audience a little wary of her character all the way through.
There are spoilers to be given, but to speak about them is not important in a review: the film’s simplicity in premise is one of its greatest strengths. Horror films nowadays have to explain everything, have rules, break the rules, establish lore and legends… Us gives you just enough to be invested, while it blows your mind with some weird developments.

It is refreshing to see a new story, in a genre that is happy to either be ridiculous and stupid (The Nun) or far too earnest (Hereditary), and during Hollywood’s binge of remakes. It is easy to imagine this film being remade one day… twenty years from now?

Any drawbacks are superficial and small. The younger actors weren’t particularly standout, but they had chemistry of their own, which bounced off their parents very well. In fact, most “errors” are explained away after giving the story more thought, even the initial horror trope that occurs within the first five minutes! “Watch our daughter, okay?” Loses daughter. Even that is explained, to a degree.

It likely demands a second viewing, and will probably get one! If you are a fan of the horror genre, and of Get Out, you cannot go wrong. I’d recommend going into this knowing as little as possible. Maybe even not watching the trailer.

Additional Marshmallows: I was a little wary of audience members… given it is a horror film… but I suspect the film was good enough that they were stunned silent!