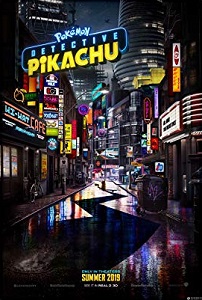 For fans and general audiences, Detective Pikachu is a lot of fun and has a lot of heart!

After his mother’s passing, and feeling estranged from his father, Tim Goodman never saw the appeal of becoming a Pokémon Trainer, he instead worked in insurance. But upon a chance encounter with a Pikachu who he can somehow understand, recent news of his father’s death might not be as simple or as genuine as they appear.

It is hard to deny that Nintendo’s Pokémon franchise is a phenomenon of massive proportions. Starting out as a card game and then leaping into video games on the Nintendo GameBoy handheld console in 1996, there are now seventeen main line games in the series, and dozens upon dozens of spin-off games. Each game of the main line introduces new creatures for the players to collect and battle with, making the current total over eight hundred Pokémon, a staggering number. Each with their own personality, designs and characteristics. Plus, there’s a another new game released this year. If you have indeed lived under a rock for the last 25 years, the games involve not just collecting the monsters, but also training them for tournament-style battle with other characters, collecting and swapping attacks and abilities to better suit a team or individual Pokémon.
For something so massive (Japan even has Pikachu themed parades, with hundreds of people dressed in identical costumes) it is not a surprise to hear that 2019’s Detective Pikachu isn’t the first Pokémon movie. Oh no. There have been twenty-two Pokémon animated movies so far. While the majority of them never had wide cinematic releases, Japan often shows them in theatres.

For the record I have only seen the first film, 1999’s Pokémon: The First Movie, and I wasn’t a fan. Also, the guts you must have to call your first movie “The First Movie”…

So how does Detective Pikachu fit into all of this? Remarkably, the film does take direct inspiration from one of the spin-off games mentioned, a game of the same name. This was in fact a wise move. Instead of bombarding general audiences with 800+ monsters, multiple references, character cameos potentially spanning seventeen games, locations, tournaments, fighting moves, or type advantages, the writers dial everything back to a more traditional narrative: a murder mystery. Moreover, Pokémon have a certain quality that probably made the ears of parents bleed back in 1996; they only talk by saying their own name. However, the video game the 2019 movie has taken inspiration from has a Pikachu who can talk normally.

This is probably the most important and influential element in this film’s success.

Directed by Rob Letterman (worryingly behind such “movies” as Gulliver’s Travels) starring Ryan Reynolds (Deadpool) as the voice of the electric mouse Detective Pikachu, and Justice Smith (Jurassic World: Fallen Kingdom) as Tim, our human protagonist, it is a bizarre mix of talent. Ryan Reynolds shines as the diminutive, sporadic, CGI character, making him both extremely fun but also surprisingly likeable. To be honest… who else but Reynolds can do that in this age of cinema? His brand of line delivery and comedic chops were on point here.
Justice Smith is also a great personality, and helps ground the audience who aren’t on board with Pokémon. He has certainly shrugged off whatever nonsense was happening in Jurassic World: Fallen Kingdom! His character has lost a lot, and lives in reluctant solitude, barely accepting the existence of Pokémon in a world where virtually everyone has a “partner” Pokémon. We are introduced very early on that this film is not about “becoming the very best Pokémon trainer”, we are also introduced to the fact that Pokémon are everywhere.

It is a very visually rich movie. Our characters inhabit Ryme City, a new location for the franchise, and one that humans and Pokémon live together in harmony. That’s right, no battles, no tournaments, no trainers (the script specifically states). So begins our trip into a murder mystery comedy, with a select few monsters making appearances, with either cinematic heft and nostalgia in mind. These creatures are adorably and beautifully rendered into the world with some great computer generated effects. There isn’t one scene where the bright and colourful set lighting isn’t being used to dynamically show off these creatures. Even as a “non-fan”, the Bulbasaurs wereadorable. Even one of the franchise’s most unsettling of creatures, Mr. Mime, has one of the best and funniest scenes. It makes sense too, since Nintendo creators were supervising the design work and representation of the creatures, even on set. The attention to detail was staggering; plenty for fans to see and admire, the shots are bursting at the seams with silent, background references.

That is perhaps another strong element; the references and jargon are there, but they aren’t crucial to understanding the story.

Fifty Pokémon out of eight-hundred might seem light, especially for a massive urban setting, but for what is a very unusual movie, without much guarantee of success, limiting your budget on a few monsters is likely the best option. The plot itself is fairly silly, and doesn’t lend itself too heavily into the investigative caper tropes; preferring to bounce our characters from one crazy set piece to another, dropping huge exposition dumps with convenient hologram-reconstructions as “clues”. There were a couple of moments where the plot lost me; one too many conveniences, edits between scenes. These are relatively minor. More time is spent selling the world and the characters than telling a compelling mystery. Our villains are a suitably cartoonish, Saturday morning fare, and there is a great little twist at the end.

The film is a great little piece of entertainment. It is also insular, which was rewarding to see. There’s no apparent master plan at work for a expanded Pokémon movie-verse. Which considering today’s cinema, the franchise’s history, and Warner Brothers involvement, is a staggering surprise!

It will make you laugh, it might even make you sad. It has a surprisingly mellow undercurrent with its characters despite the crazy antics it employs otherwise. But most importantly it can win over fans and non-fans, young and old, alike.