Another Disney remake, another lesser version of a film that already exists.

A street thief has the hots for a princess, and after being lulled into a task by an evil vizier, he stumbles over a magical lamp. Inside this lamp is a genie who grants him three wishes, and a moral quandary lies ahead of him.

Aladdin is the live action remake from Disney of their own 1992 award winning animated classic, Aladdin. In this day and age that isn’t very surprising, this is the sixth live action remake in this recent spat of films, but what is surprising… is that the director of this film is Guy Ritchie. The director who made his name with adult gangster films such as Snatch and Lock, Stock, and Two Smoking Barrels. But don’t worry… there’s absolutely none of his style or personality in this family-friendly film. I imagine Disney is very happy with how this inoffensive, box-ticking copy turned out.
Which is what this film is, a copy. Taking a similar stance as 2017’s Beauty and the Beast remake, Aladdin is virtually a shot-for-shot remake, or at the very least it is beat-for-beat.

Watching the Aladdin remake is a little like watching Aladdin himself when he’s dancing uncontrollably to the whims of the puppeteer genie; sometimes moments of genius, most of the time it is struggling under the requirements of the original. We open with Will Smith’s genie, very much human and years after the film’s story, recalling the tale to his kids. This transitions into a rendition of “Arabian Nights” that brushes over the original’s opening with the cave of wonders like an afterthought. While this is stepping up to be a classic “bookend” narrative device, the film doesn’t even manage achieving this.
We then get the animated movie again, only with actors Mena Massoud and Naomi Scott in the leads as Aladdin and Jasmine. Credit where credit is due; these two are good in the roles, there is no problem seeing the characters shine through. 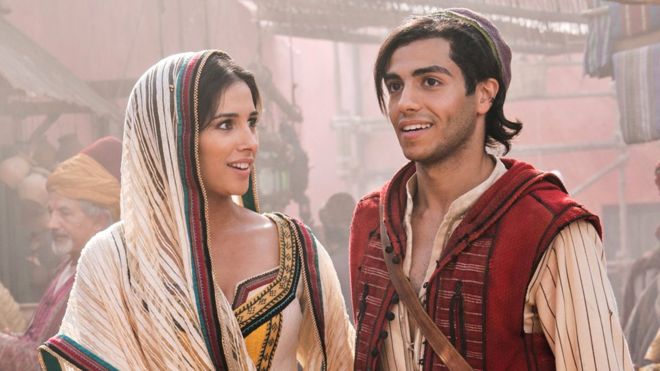 However, the film’s quality from here on is extremely spotty. For a start, as Aladdin and Jasmine are chased through the town in the film’s opening act, there are some weird frame rate issues. For example, besides unnecessary slow-motion, there’s also moments when the action is sped up. This is such an antiquated directional choice that it looks like a looney toons cartoon nowadays. Hideous.
Before long though, the plot barrels along in its quest to hit nostalgia nerves, and we are in the cave of wonders (which looks distinctly boring in this realistic venture). The film botches the magic carpet’s introduction, treating it like an afterthought compared to the original’s grandmother’s footsteps scene. Then we get to Will Smith’s genie.
Wow, does he take some getting used to. The film doesn’t do him any favours at first; the genie’s rendition of “Friend Like Me” is borderline creepy. No one should see blue, floating torso Will Smith grow multiple heads, or turn Abu (a realistic looking monkey) into a cymbal-smashing toy. Nightmare fuel! Not to mention, it was the villainous Jafar who did that to Abu in the original!
But in fairness, even matching Robin Williams’s genie from 1992 is an impossible task. Not only did he pave the way for post-modernism in Disney films (and dozens of copycat movies) but Williams had a charisma and vocal talent not seen since. Will Smith does his best, but surprisingly his best performance comes from regular back-and-forth scenes with Mena Massoud. The two have good chemistry as unlikely friends. The film’s best scene is easily after Aladdin and genie have successfully met with the Sultan, but Aladdin fails miserably at being a prince. They do give genie a love interest… which feels completely unnecessary; the genie has enough agency as it is to be freed from the lamp already. 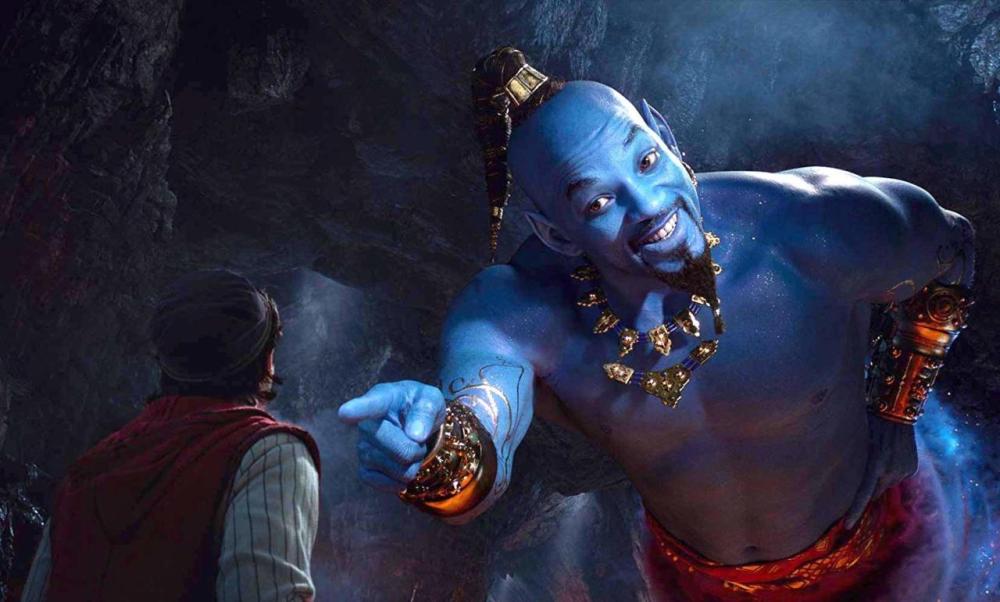 Jasmine has had some evolution in the last two decades. While in the animation she was feisty and independent, she is now insistent on becoming Sultan, rejecting the concept of an arranged marriage without any added influence on their city. This manifests itself in a new song “Speechless”, which while well intended, feels a little forced. Speaking of songs, the renditions here are alarmingly similar to the originals at times, as if they had simply dubbed the audio over the visuals.
Our antagonist Jafar is unusual. He is surprisingly young, and claims favour initially with Aladdin by describing himself as having also been a thief. Okay. Unfortunately, despite Jafar one-upping Aladdin in thievery, he also sucks at noticing when people steal from him!

Aladdin (2019)’s underwhelming reception with critics is justified. Like Beauty and the Beast, we are trading the charming and expressive animation (the magic carpet and the genie especially) for clunky CGI mimicry. The worst scene in this regard, is unfortunately the original’s most memorable: “A Whole New World”, which instead of a glorious piece of animation with sweeping visuals and dazzling colours, is now a muddy, shadowy blur with two actors awkwardly green-screened into it. It wasn’t magical, it was tedious.

As a film, it owes everything to the 1992 film. While it does do some scenes better (often when it breaks from the script) the rest feels like many of these Disney remakes feel: like a lesser version of something we already have. After the underwhelming Dumbo this year, the studio may need to look more closely at its future…