What a strange little film.

The quiet little American town of Centreville is about to have a rude awakening when zombies start rising from the grave. It is up to two unlikely local cops to find a solution, and fast.

You might be forgiven to think that The Dead Don’t Die looks like a cross between a George A. Romero classic and Zombieland, maybe with a bit of Shaun of the Dead thrown in. However, the film is surprisingly… dry-witted, and an extremely slow boil. If you are expecting wall-to-wall comedy, or even a gory zombie movie, you will be sorely disappointed. 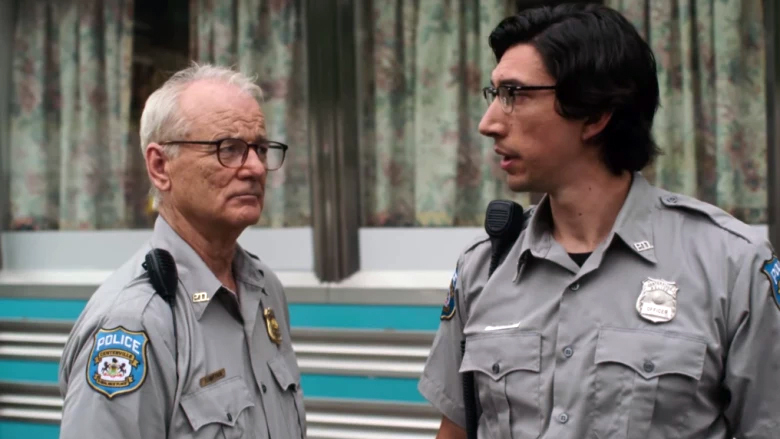 Of course, that isn’t to say director Jim Jarmusch’s film isn’t bad. Far from it actually. For the advertising it has, this is more of an independent picture than your standard Hollywood flair. We start off slow, but we are introduced to this film’s brand of unorthodox humour. A dry wit with dollops of post-modernism thrown in. There is a sense these days that leading star Bill Murray really does pick surreal comedies; comedies that are not the usual and cater to very niche tastes. He is one of our local police officers, alongside Adam Driver who again, outside of Star Wars, proves himself a fantastic actor, this time capable of ultimate deadpan timing. He is up against Bill Murray and yet he comes out strong.
At only one-hundred minutes, you might think a zombie film would charge along and be over as soon as it began. Not so. The impatient individuals in the audience will wonder when the zombies are showing up, as we are introduced to a broad spectrum of characters, from Steve Buscemi as the most unimpressive Trump supporter allegory, wearing a red cap that says “Keep America White Again”, to Tilda Swinton as a wraith-like Scottish mortician who wields a katana.
It isn’t too long before the undead start to rise, and these befuddled and bumbling American citizens tackle it much like any one in today’s society might; with a bemused shrug of indifference.
Indeed, The Dead Don’t Die has strength in its subtexts. Adam Driver’s character, Ronnie, asides from breaking the forth wall by detecting the film’s theme song among other things, is openly aware that what is happening is a zombie apocalypse. In fact, he isn’t alone. Everyone has seen zombies, there are films about them all the time. Everyone knows it is the end of the world. There’s an amusing “But of course it is” vibe through our character’s behaviour. This is quite refreshing, considering so many zombie films try to gloss over how unrealistic it is that no one identifies these creatures from what should be the same pop culture as ours.

However, it isn’t for everyone, and it tries to be a little too clever at times. Subversion is the name of the game here, and one wonders if Driver’s character having a Star Wars keychain and we address this in the script, means this film is digging at The Last Jedi. But we are given a dozen characters and ideas of where they might go in the story, but most if not all of them do not. Swinton’s character is easily the most bizarre. Easily.
It also attempts social commentary in its last gasps, which frankly comes out of nowhere and clashes with the deadpan humour. It gave a resounding sense of “We didn’t know how to end this”.
These things will rub a lot of audiences the wrong way, and that is understandable.

But in an odd way, the deadpan jokes were kinda fun. Even the run-on jokes got the wry giggle. But like all comedy, it is a subjective thing. The gore is somewhat decent, but fairly artificial looking (the zombie deaths are aggressively CGI) but the zombies themselves are played for funny gags which mostly land.

The film is silly, and not quite big enough for its boots.

Additional Marshmallows: From the trailer, it seems like one of those films they didn’t quite know how to market…