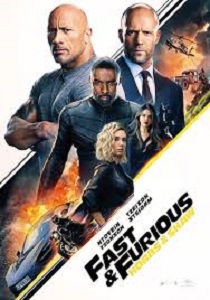 So far removed from the franchise that it is almost bearable in its stupidity.

For no discernible reason, different agencies from America and Britain team up two men who hate each other to stop a cyborg from destroying the world.

If it weren’t for the utter paranoia of studios unable to release a movie without brand recognition to catch the fickle, fleeting attention of the distracted masses, Hobbs & Shaw could have dispensed with the “Fast & Furious” prefix to its title. If anything, Hobbs & Shaw is the byproduct of bad blood between stars Vin Diesel and Dwayne “The Rock” Johnson, as the former felt threatened by the other’s on screen chemistry dwarfing his own. Causing the magnetic Dwayne Johnson to foster a spin-off, no less taking a producer role alongside his co-star, Jason Statham.
Directed by David Leitch, the man behind the tragically misguided Atomic Blonde, but also the awesome Deadpool 2 (so that’s an even split of quality there) Hobbs & Shaw is completely removed from the Fast & Furious franchise. Audiences have no fear of being lost: apart from a bit performance from Helen Mirren, our characters are the actors playing themselves and stuff explodes around them for two hours. In fact, any vague lip-service to its mother franchise feels pointless at this stage, and frankly the more you think about the franchise it came from, the more this project falls apart.
Jason Statham (playing Jason Statham) was a villain not two movies prior, a villain who could magically teleport around the globe so well that they needed science fiction gadget “The God’s Eye” to specifically track him. In Hobbs & Shaw he of course can’t do this. Despite being a villain, he teams up with Dwayne Johnson, who for all intents and purposes, is a cop. But it is fine. Johnson’s character has a kid we’ve never heard of before, and Statham has a sister who is plot critical who we’ve never heard of before. So they are heroes now.

On the other side, we have Idris Elba. Despite being a phenomenal actor, just gets to say repeated lines about “human evolutionary change” with a straight face, while also being a cyborg with a transforming motorcycle. Who is also after a bio-engineered virus that can be programmed to target anyone.

In 2001 the most dangerous thing was some dudes stealing DVD players. Remember that? How times change. 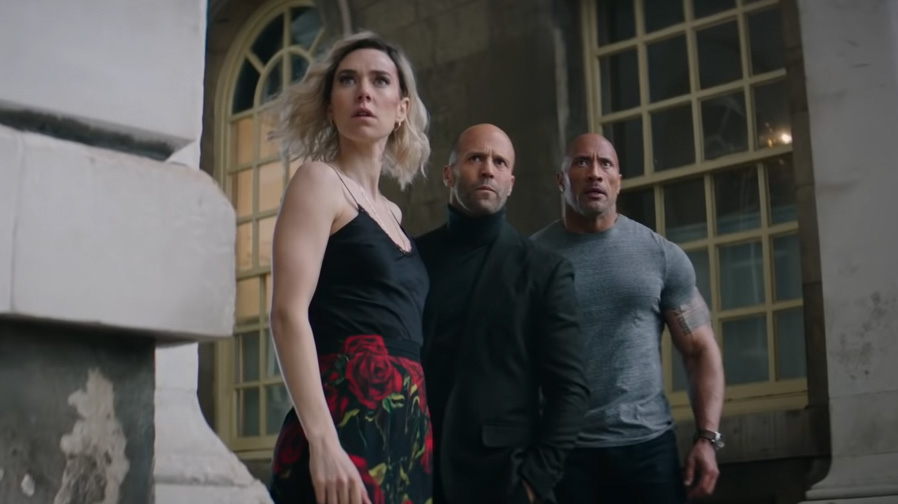 It gives strong memories of films like G.I. Joe, or perhaps even Transformers (we do have shape-changing bikes that go woh-wur-woo-wee-woah), and like those sorts of films, perhaps the hardest part to get through is the start. The film-makers try to soften the baseball bat-of-stupid by bringing in Ryan Reynolds for three minutes to quip pop culture references. Or if you aren’t sated by that, there’s a drawn out joke about how Dwayne Johnson does “that eyebrow thing”.
We get a repetitive chase through London-definitely-not-Glasgow-Scotland-shut-up, which involves going up and down the same five blocks of street a few times. The fight scenes are choppy, which for the new direction of the franchise is pretty disappointing. Followed by Statham’s character proving how good his character is at travelling anywhere in the world… with the worst (and definitely not legal) passport photos imaginable. They are so bad they change between scenes.
Most of the comedy stems from the two characters throwing abuse at each other non-stop, basically that scene from 2017’s Fate of the Furious in the prison, only continuously.
Also let’s not talk about Kevin Hart in this film. Please. That scene was agonising. Sure, haha, Johnson’s obviously friends with him since filming Jumanji and Central Intelligence and wanted to throw him a bone. Just write something that is even remotely funny or relevant first.

Okay… Good things.
Once the first and second acts are over, the third (and initially unwelcome) act actually gets fun. Whether this is Stockholm syndrome or not, not entirely sure… or perhaps blunt force trauma… We have a great little skirmish with helicopters and hot rods, as well as primitive warfare versus science fiction weaponry. It was almost like The A-Team on steroids. Plus it had cars being used to save the day/be relevant.
Kudos to Vanessa Kirby as well as our female lead Hattie, who while being sandwiched between these two loud bald men, was holding her own. She got her own fight scenes and was no damsel in distress. Plus there was some concern for her character’s life, unlike the two men who were impervious to harm at all times because if this film works it’ll get all the sequels.

It is a brainless, somewhat tedious action movie. Which is more than can be said for the last two mainline Fast & Furious films. Hobbs & Shaw will not win over any new fans, but when the stars stop congratulating themselves for a moment, it can be quite entertaining if extremely stupid.

Like… really, there’s a plot with the bad guys having electronically coded guns, which no one else can use. Yet, earlier in the film, Statham can liberally use these guns no problem?