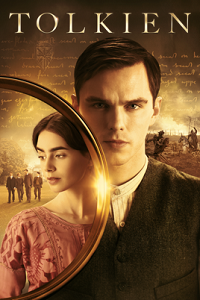 A young boy returns to England with his mother and brother and begins to study for a scholarship. Meanwhile, fantastical thoughts of otherworldy places and languages infatuate him.

With the huge success of New Line Cinema’s Lord of the Rings trilogy and the lukewarm success of The Hobbit trilogy, what more is there to do except make a biopic of the man who wrote the original stories (besides jumping head first into the dense Silmarillion). 20th Century Fox’s Searchlight studios produced Tolkien with director Dome Karukoski and lead star Nicholas Hoult, and it should be noted as well that the author’s living family and estate did not approve of the film’s creation, nor did they authorise it.

The film a surprisingly sombre experience; following John Ronald Reuel Tolkien from childhood to adulthood, never touching on the actual creation of the stories he is most famous for. The story depicts a quiet, humble boy surrounded by academics and lofty expectations, the desire to create something new, something beyond the stuffy book-learning that was expected of them.
It throws a lot of symbolic imagery at the audience early on; his family’s ousting from gentle, rural surroundings into smoke-belching industrialised cityscapes. One of the most literal themes running through The Lord of the Rings. This storyline is interjected with leaps into the future, seeing Tolkien’s involvement with the Battle of the Somme during the First World War. Again, heavy with the imagery, not only does Nicholas Hoult as Tolkien appear to be struggling on some personal quest in a fire-burnt desolation, but he is accompanied by an ever helpful companion called Sam.
This editing style is persistent throughout the film; regardless of what is happening during Tolkien’s young adult life, the film will cut back to the battlefield and share some strange, shadowy hallucination. Tolkien seeing dragons and Black Riders upon the barren No Man’s Land. It doesn’t evoke cleverness or intelligence that the film’s subject is about, it evokes a sense of: “Oh, if we don’t see some cool fantasy imagery, we will lose our audience’s attention!”

It is clear that the content of his stories was inspired by the Great War, but the way they manifest themselves here seems borderline silly. If the story had been more linear, having us see a man struggle with his social status, only to slowly start to appreciate the skills he has moments before suddenly being sent off to war. It could have been far more dramatic, instead of showing it within the first ten minutes.

The rest of the film is Hoult engaged with romantic tension with Lily Collins’s Edith (Tolkien’s future wife) as well as his brotherhood with several other academic boys he studies alongside. To the film’s create, the time period is well represented, although the alarmingly learned boys talking like adults might bewilder many any audience member. The back-and-forth between Hoult and Collins is serviceable, and there are moments of fondness and japery that gives them more chemistry, but a lot of it does feel contrived and baseless.

It would have been good to see a little more of Tolkien’s life; the film (unsurprisingly) ends with “In a hole in the ground, there lived a Hobbit” being penned for the first time. His want to write The Hobbit for his children, followed by publishers wanting a full trilogy directed at a more mature audience, and his friendship with C.S. Lewis, could have been fascinating to see realised, all powered by his recollections of what had happened in his past.

It is a surprisingly forgettable story, with only the most fundamental themes of creative inspiration and self-discovery to hold it afloat.