A superb, solid drama following the events of Ford Motors taking on Ferrari at the 1966 Le Mans.

Le Mans 24 hour race is one of the oldest motor sport races still held today. Held in France, this gruelling endurance race runs for an entire day without stop, with drivers pushed to their limits through day and night. This film follows the foundering, public-orientated Ford Motors company attempt to create their first ever racing vehicle in attempt to beat Ferrari at Le Mans. Ferrari, who have so far been undefeated at the race.

Director James Mangold has really become a force to be reckoned with in today’s cinema. Who would have thought the director of Cruise/Diaz failure Knight and Day, or the lacklustre The Wolverine, would go on to create 2017’s Logan and now this, a possibly Academy Award worthy production. It really is quite surprising the level of authenticity on show, and the performances delivered.
The film follows Carroll Shelby, an ex-racer turn car designer (played by Matt Damon) and his promotion into Henry Ford II’s company to answer the challenge laid down by Ferrari’s dominance. Why? As decided by committee, Ford sees a win in this tournament as a means to selling more cars.
While Ford has limitless finances while at the height of their corporate sector, Shelby knows that you also need the right driver for the task. Enter Ken Miles, played by Christian Bale, a ragged, unkempt genius mechanic, race driver, husband, and father.

Le Mans ’66 (also known as Ford Vs Ferrari in the US and Canada, like it is on par with Freddy Vs Jason or something) is a drama first and foremost. It takes a moment to get into gear, and while it does have some jargon-fuelled script moments, the story is not about the construction of the now famous Ford GT40. In fact, when it appears, it does literally that: it appears. Having been designed and built off screen.
The film’s momentum is built from the divisive motivations of the primary characters. Bale’s Ken Miles is a racer at heart, dedicated to “the perfect lap”, while Ford is about corporate image. In the middle of this, is Damon as Shelby, under their employ but also Ken’s best friend. Christian Bale delivers a characteristically charged performance as the bluntly honest mechanic whose demeanour and personality clash continuously with those around him. But it is ultimately a very nuanced performance at heart, and he does steal the show. One shouldn’t overlook the production values either, or the soundtrack. Both are exceptional, the first being very immersive with the times of the events, while the latter is tremendous. Very punchy music choices.
Once the film grounds itself and has captured the audience, only then does it hit us with the main events. The racing. It does not do things by half measures, and Le Mans is not the only race, as our protagonists go through many trials and tribulations trying to perfect the GT40’s performance to win over the graceful, handcrafted Ferrari vehicles. The action is intense and very well choreographed. Any CG elements were not visible, and therefore not over done. You feel the tension and the extreme daring that drivers push themselves and their machines. The internal politics remain the focus of the events, even when the rubber is burning, and this level of strife is even seen in today’s racing events. If you are a fan of any kind of motor racing, you will know the sort of meddling and anger exhibited behind the scenes, threatening to undermine the sport from the inside.

Indeed, the heart of the story is the passion for achieving perfection, and the desire to do what you always wanted to do. To have the chance to fulfil your dreams. 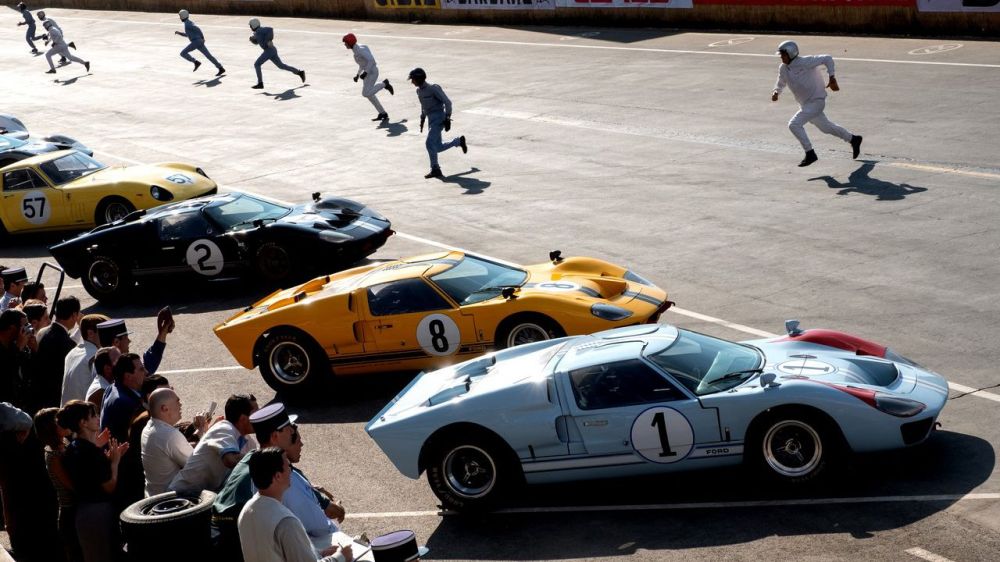 If there is anything that was detrimental, it would be one single scene. Early on, Ken Miles loses his garage and the pressure falls to his wife Mollie, played wonderfully by Caitriona Balfe. When Ken goes off one night with Shelby to see the GT40 prototype, the following day Mollie flies into a rage, driving their car recklessly through busy streets, demanding to know what Ken intends to do with his life and that he shouldn’t keep secrets.
In isolation, the scene is superb. But in context of the movie, it feels surprisingly unwarranted. The family are about to suffer a financial crisis, and Mollie in the previous scenes had wanted Ken to do what he enjoys; racing (she is even seen as more than accommodating of his passions earlier on) and the pressure on her is not stressed enough in preparation for this explosion. Plus, this scene is after they had been shopping. Presumably hours have passed, including the evening before. Why didn’t Ken just tell her what he had been doing? The scene is immediately defused when he tells her, because working for Ford means you get a lot of money.

Despite that high criticism of one scene, it is only one scene. It does not impact Balfe’s character or performance overall, in fact she has a great little scene later on which was certainly one of the best in the film. The pacing of the film is not affected either, it merely felt slightly off-kilter; perhaps requiring five more minutes before hand to show the developing strain on Mollie and why disappearing one night could be such an issue for her.

But ultimately, Le Mans ’66 (or Ford Vs Ferrari) is a superb experience. For anyone wanting another great motorsport film, the last one being 2013’s Rush, you shouldn’t be disappointed. A bold, passionate experience with excellent performances, pacing and action.